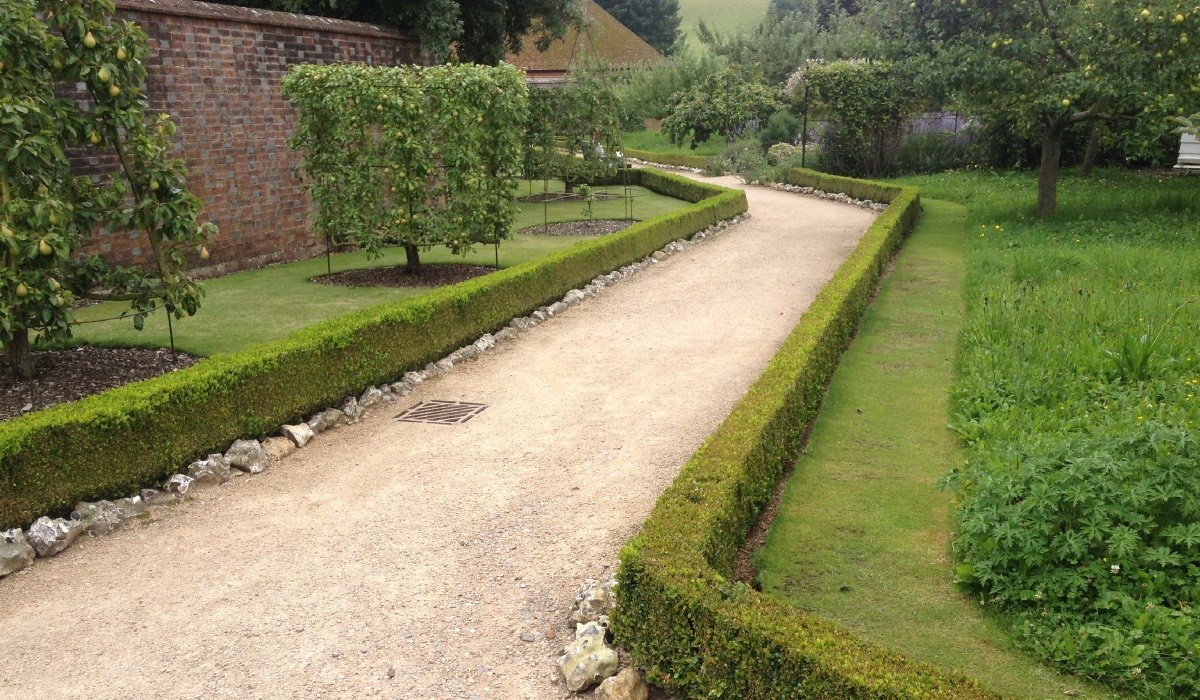 Edwardian Gardening Genius
The walled gardens at West Dean contain some of the finest examples of fruit training in the British Isles.

West Dean Gardens in West Sussex include one of the finest restored Edwardian kitchen gardens anywhere in the world. If you want to see trained fruit (and veg) at its best it should be on your itinerary.

The photo above shows a view down one side of the walled fruit garden, which is laid out in quadrants, transected by two long paths. Each quadrant contains a small orchard of free-standing apple trees, growing among rough grass and wildflowers (right hand side of image above).

The perimeter path follows the wall, where pear, plum and cherry are trained in many forms, freestanding (see left hand side of image above) or against the walls. The south-facing walls are the tallest, and it is here that the great Edwardian lean-to greenhouses grow grapes, peaches, nectarines and figs.

Featuring prominently in the two photos above are pear trees trained in dramatic free-standing forms: some as drums, others as cones.

The pears are trained over several years to a preformed steel framework (above). Bamboo is used to create a six spoked wheel along which the pear will initially be trained. I don’t know how they manage to get six radial shoots, all travelling in the correct directions – they didn’t have any trees at an intermediate stage to give an idea, but it’s clearly possible and very impressive!

The six radial shoots are forced to bifurcate just before they reach the rim (just discernible above), creating a forked ‘Y’ shape so that a total of twelve shoots reach the perimeter of the circular frame. At this point they are trained vertically on a new set of bamboos:

Even though the final form has not been reached you can see that the tree is fruiting very well.

The completed shape after many years of expert training.

Such forms are not only beautiful, but increase the health of the tree. Amazingly, some trained fruit trees outlive their orchard counterparts. In this case, by creating an open-centred structure there is good air circulation reducing fungal problems, plus all the foliage receives high levels of light, furthermore, with fruit only being produced around the perimeter picking is also very easy.

Cordons (single stem) apples and pears allow a large number of varieties to be grown in a small space.

Throughout West Dean kitchen and fruit gardens there trained fruit adorns the beautiful old brick walls in a multitude of forms. In most cases, the trees are trained to a steel frame of the same shape.  You can see this in the close up of part of the S-shaped pears below:

There is quite a lot going on here: wires and vine eyes ensure the whole structure stands clear of the wall for air circulation. A bamboo cane runs behind these wires, for what I can only deduce are aesthetic reasons, to create the impression of a snaking ‘tree-on-a-stick’. The black wire frame template is attached to the wires. Then the pear tree has been trained in front of this.

However, its actually not the common edible gooseberry, but an ornamental one – ribes speciosum – the Fuschia flowered Gooseberry.

I’ve never attempted to grow a gooseberry in such a form (mine are all half standards). The thorns are enough to put me off, but since seeing this one I’ve changed my mind – it’s stunning isn’t it?

The pear walk runs across the kitchen garden creating a beautiful vista terminated at each end with a bench. Its a simple design, but works well as it is carried out with aplomb.

As with the previous trained fruit forms, West Dean has employed a simply steel framework against which the pear trees have been trained.

The pears form simple arching cordons that line the walkway every couple of feet (see close up, right), providing shade, and an almost ideal wind break for the vegetable beds to either side.

I have come to appreciate pear as probably the best fruit tree for training in complex designs. The foliage remains healthier than apples, which are otherwise their equal.

You can read about my attempt at a pear fan here.

One of the huge Edwardian greenhouses is given over to the perfect growing of just three grape vines. The large area of bare soil enables precise feeding of the extensive root system these long lived vines require. The largest (and oldest) glasshouse grape vine I have ever seen is at Hampton Court Palace. These ones are mere babies in comparison!

Growing vines as standards in pots is possible, but to my mind would be a very labour intensive method of production. However, the end result is very attractive, and makes a change from the ubiquitous, and frankly drab, bay laurel lollipops that seem to be in every garden centre these days.

Trained forms in the greenhouses – Peaches (and nectarines)

Another greenhouse has peach fans trained on the rear wall. It is nice to see one of the fans is still in the early stages of training, whilst the other is well established. Unfortunately, I was a little to late in the season to see it covered in peaches.

You can attempt fan trained peaches outside in the south of the UK, on a sunny wall, but they really benefit from protection from the rain which carries the disease peach leaf curl between November and May. Apparently, suitable protection can be achieved during these months with a sheet of polythene arranged to form a canopy, hanging 30cm in front of the peach to the ground. Certainly cheaper than a 40ft Edwardian lean-to greenhouse!

Renovation of the Glasshouses

West Dean is currently running an appeal so that they can restore these magnificent greenhouses. They are undoubtedly a national treasure and despite having visited them many times over the years they never fail to impress me.

This greenhouse is in the process of being renovated.

What is interesting is that the old grape vines have simply been lowered from the roof, and will no doubt recover fully and be returned to their former glory once the work is complete!

If you are looking for a garden to visit I cannot recommend West Dean highly enough (see their website here). In this post I have only covered a small part of what is on offer – so give yourself plenty of time – and take a notebook and camera to record your ideas.