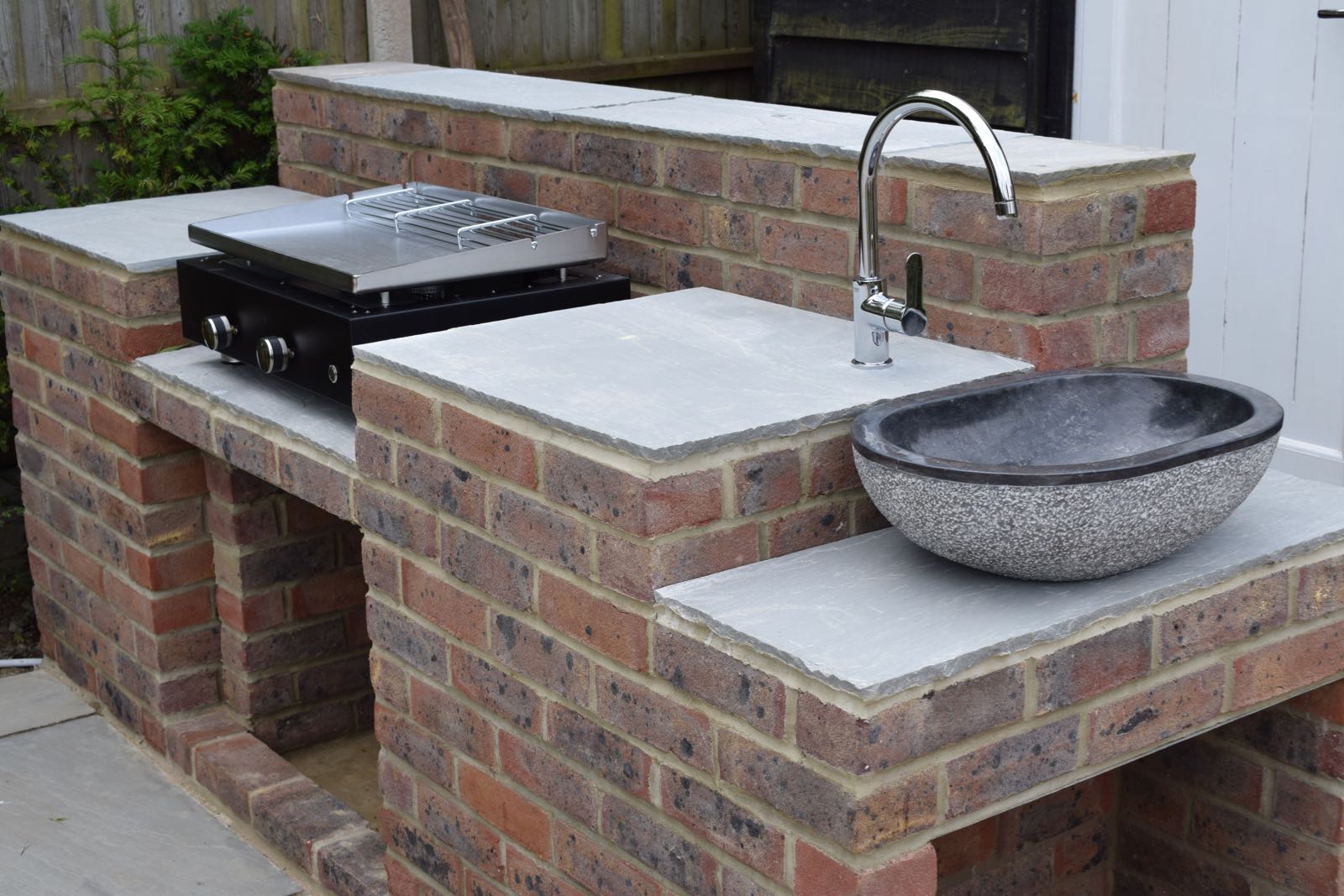 This mini outdoor kitchen has a gas barbecue, sink and tap. The gas cylinder and plumbing are hidden in cavities at the back. It is situated at the far end of our garden, adjacent to the patio, and close to the cabin where we put up guests. It is adjacent our vegetable garden, so fresh veg is right at hand.

Cooking cod fillets with onions and beefsteak tomatoes from the garden

We planned for a gas plancha style BBQ which has a large flat stainless steel cooking surface for frying/grilling food. We bought a grill that has stainless steel burners – from the French company Verycook – so that it can be left outside all summer. That said, I intend to construct a lid to cover it when not in use to keep out leaves and insects so it is ready to go at short notice.

The sink is actually a bathroom wash basin carved from a single piece of marble. These are quite reasonably priced – barely any more than a couple of  quality garden pots. I’m hoping it will be frost proof. I don’t see why not, as garden statues can be made of marble. It’s style is quite like the black pots we are using in the garden.

The tap is a Grohe kitchen tap. We will see how it stands up to the weather. If the chrome wears off eventually it shouldn’t matter as it is solid brass beneath. It is plumed with potable water via polypipe (plastic push-fit plumbing) which I had to run above ground for part of the way. As its not frost proof I have arranged that it can be drained down during the winter.

Other functions of the sink include washing garden vegetables prior to taking them into the house or placing small potted plant in when they need soaking.

To the rear of the structure are two cavities. One holds the gas cylinder for the grill, and the other has the plumbing for the tap. In the latter cavity I included a brass tap for attaching a hose pipe to.

The bricks are Freshfield Lane multi-stocks which we have used throughout the garden and are the same as the pavers used for the paths (as you can see in the photo above). These have a soft, traditional look which blends with the garden.

The surfaces are Castle Grey sandstone slabs which we used for the paving in the front and back gardens too. Again this produces a unified look.

To achieve this neat and compact design I had to plan the structure almost down to the individual brick. To do this I uses MS Word, and set the grid to 1mm. That allowed a 1:10 scale  drawing. I found a brick texture which I applied to the shapes and scaled the picture fill until the bricks were the correct size.

The basin and BBQ sit on slabs that are 150mm (two bricks) lower than the main work surfaces.

The back of the structure has two cavities: on the left for the water supply and tap plumbing plus a garden tap for a hose pipe; On the right, for the gas cylinder.

The sink drains into the space below and soaks away into the ground. A proper soak-away is not needed as this will only get occasional use. We have placed a watering can underneath the waste pipe which means we can use the waste water on the garden.

We employs a local brick layer and landscaper. It turned out that they were not used to such detailed work, nor reading technical plans accurately, but with a lot of ongoing discussion and oversight they managed to do a pretty good job.
They were only responsible for the bricks and slab construction.

The lintels over the openings support very little weight – just a row or two of bricks. They are supported whilst the mortar sets.

The brickies work is complete. They were impressed with what they had achieved: it’s the poshest BBQ they have built!

Once the brickies had finished I had to drill the tap and waste holes and install the tap and sink. I bought a Titan diamond grit-edged holesaw kit from Screwfix, which proved ideal for the job.

After measuring up carefully I had to drill a pilot hole (7mm) through the centre of the required tap hole. The Titan diamond grit-edge hole saws have a central drill that keeps them aligned. Cutting the hole with them was actually easier than drilling the pilot hole. That’s diamond for you!

The sink waste was made the same way. The Titan hole saw sizes were not perfect but close enough not to matter. The tap and basin went in without a hitch.