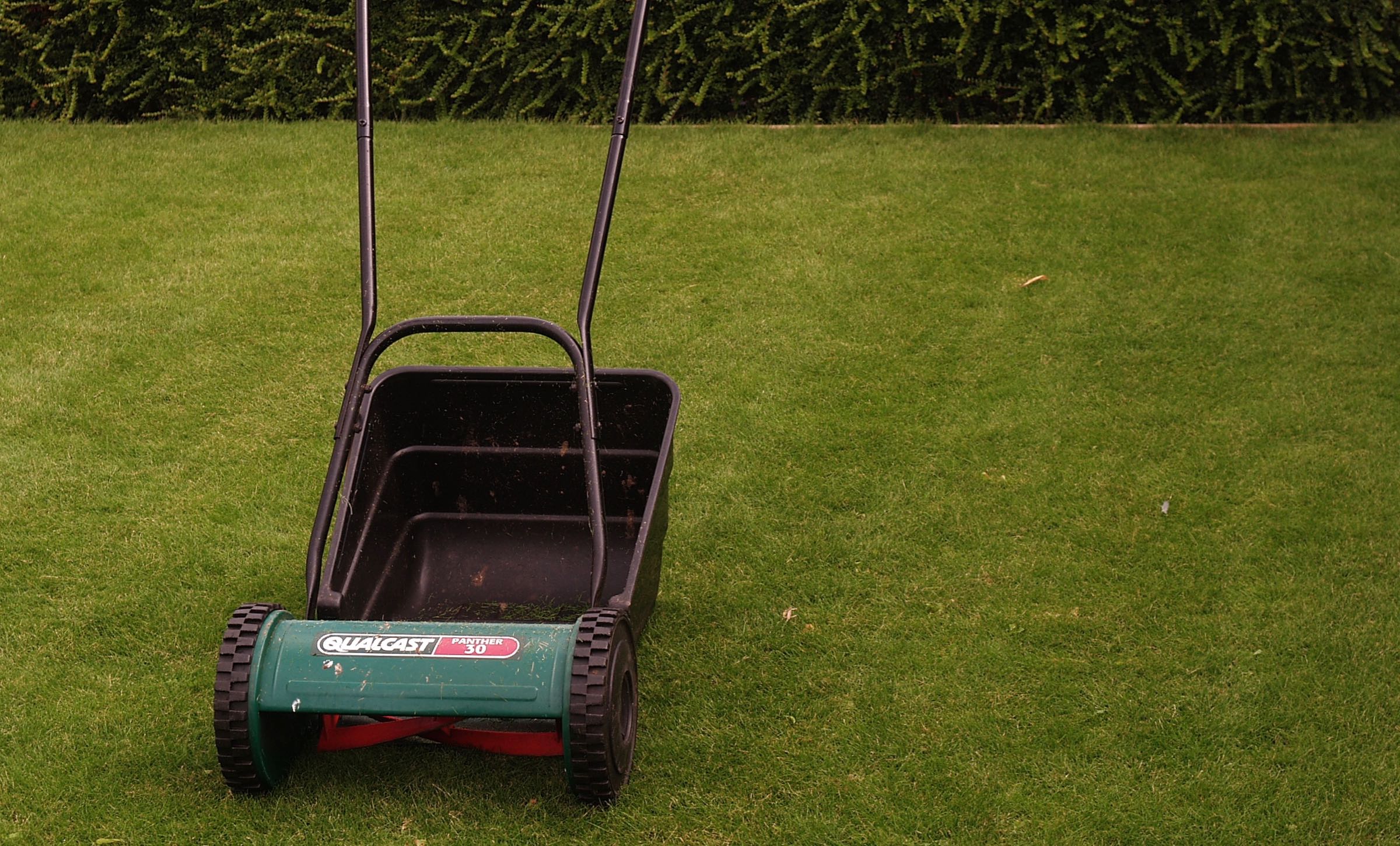 Recently we had some friends over for a lunch party and without prompting, two of the male guests, (why is it a bloke thing? I don’t know why it’s a bloke thing, but it’s a bloke thing) quite independently, gazed at my lawn and said with a hint of envy “Nice lawn. How’d ya manage that?” Being summer, most of the grassy areas that pass for garden lawns have browned unevenly, and can’t decide if they are actually composed of grass or random broad-leaved perennials. Mine, however, was looking good: a deep velvety green, plush and even. Not a weed in sight or blade out of place. It’s a lawn you want to lay down on, a lawn begging for a picnic.

“Oh,” I said nonchalantly, “I vacuumed it this afternoon.” I wasn’t kidding.

This is an 11 month old lawn created from scratch, seeded not turf. It’s an ornamental lawn – so only fine species, no rye grass allowed. This creates the highest quality look and feel, but means it is not as robust as a standard hard-wearing family lawn… you takes your choice. In practice, as long as it’s not used for exercising energetic dogs, or kids on swings or bikes it is perfectly robust for walking, sitting and laying on, or playing croquet rather than football – which suits me fine.

The secret to a good lawn, like so many things in gardening, is in the preparation. I had the opportunity to start with 4 in (10 cm) of new topsoil enabling my lawn to establish deep roots quickly. Deep roots are one of the keys to drought tolerance.

So why did I choose seed over turf? Firstly, it’s cheaper. Way cheaper. But secondly, I’ve seen turf laid poorly – gaps, lumps and bumps. I wasn’t sure I could do it better. That said, the main reason was cost.

How I made the lawn

I started this lawn in August 2014. The usual recommendation is to sow lawns in autumn or early spring – on the assumption that there will be sufficient rain. However, I wanted to get a head start before the winter, hoping that the lawn would be pretty well established before low temperatures slowed its growth. On larger garden projects like this I prefer working in warm dry weather. Waiting until the autumn or spring was too risky.

1. I used 4 x 1 in (100 x 25 mm) treated softwood planks to set out the new lawn, staking them every 18in or so, and fixing them with 2in screws. The tops were cut at a sloping angle so that the finished lawn will cover them. I used a spirit level to ensure the frame-work was level. (Note: Brick paving will eventually surround the lawn, finishing flush with the top of these boards) This area had flooded a couple of times in the last ten years during very wet winters following several back-to-back days of rain. Raising the lawn 4 inches will reduce or possibly eliminate this problem.

2. Next, I sprayed off the existing grass with a systemic herbicide to prevent weeds growing back up through the new lawn. Mind you, this didn’t prevent a couple of rouge daffodils and snowdrops that popped up in the spring!

3. Bone meal sprinkled over the area (the white powder visible in the photo) provides a long-term fertiliser, and will encourage deep healthy roots.

4. A good quality top soil – about 3 metres cubed in all – was then barrowed round, tipped out and raked roughly into place.

5. A long plank that reached from edge to edge allowed the soil to be dragged out level and tamped down.

6. After completing each short section I walked over the soil in close steps to compress it – as the footprints above show. More soil was then added, tamped and firmed to create a lightly compacted level surface. Without this compaction subsidence and an uneven surface would inevitably occur after the first significant rain.

7. Before sowing I sprinkled lawn establishment fertiliser over the surface. This kind of slow-release fertiliser is designed to provide nutrients without scorching the young seedlings with excess nitrogen.

8. Finally, in the dark (!) I scattered seed at the indicated rate, by hand, then lightly raked it in.

9. I kept the area watered with a sprinkler once every day or two unless there was significant rain.

10. Early September, and the seed was germinating. Every couple of weeks I scattered additional seed in bare patches or where germination was thin.

11. Careful hand weeding was necessary to remove wind blown seedlings that appeared pretty much along with the germinating seed. At this early stage even selective weedkillers cannot be used as the grass seedlings are too delicate. Likewise – they would be damaged if I walked on the new lawn, so I used a plank suspended between concrete blocks either side, so I could work above the soil and weed in the middle where I couldn’t reach.

12. The new lawn cannot be mowed until it has reached approximately 3 in (6 cm) at which point it will need just a light initial clipping with the blades set high. By the time it reaches this point the lawn can look pretty scruffy. Like this…

13. As you can see there are a lot of broad-blade interlopers (probably wind blown rye grass) sprouting between the much finer fescues. All the unwanted plants needed to be removed by hand. Time consuming… back breaking… but essential. Oh, and the lawn should not be walked on regularly yet. When weeding I laid down boards to sit on so the young grass did not get scuffed up.

14. The weed grasses stand out quite clearly as this photo shows. I used an old butter knife to dig them out. Grasses can regrow if any of the leaf bases are left, so it’s important to cut just underneath, just a couple of millimeters below the soil – it’s not necessary to dig out the roots as they can’t regrow (Note: there are a few grass species that can regrow from their roots, such as couch grass.  However,  couch does not tolerate regular mowing, so won’t persist in a well-tended lawn anyway).

15. After hand weeding it was ready for the initial cut, with the blades set high. This stimulates the tiny tufts to produce new growth from the base, causing them to bulk up into tiny clumps. Eventually the clumps will knit together, but as you can see at this stage there is still a lot of bare soil between the nascent tufts – ideal sites for wind blown seeds. Regular hand weeding is de rigueur.

16. Every few weeks throughout autumn and mild patches in winter I sowed fresh seed into any areas that were gappy or patchy. To make this easier I mixed the seed with fine dry sand (I used kiln dried block paviour jointing sand). This not only made it simpler to sow butpartly covered the seeds so they were not just sitting on top of bare soil. Also, the yellow sand made it obvious where I’d sown.

17. Before winter set in I managed to get a couple of proper cuts with the blades set low (about 2cm). I was still careful to walk gingerly – no spinning on the heel – as the young lawn could easily be damaged. Grass pretty well stops growing once temperatures stay below 5°C, so when cold and especially when wet the rule was simple: “Keep off the grass!”. In fact, except for maintenance, that had been the rule since it was created in August. It wouldn’t be suitable for regular traffic until late spring.

18. From spring onward the lawn needed mowing with increasing frequency, and by April the sward was nearly complete with almost no bare patches of soil left. That didn’t stop weed seeds that blew in over winter from germinating, so hand weeding continued throughout spring. However, on sunny days it was now possible to enjoy sitting or laying on the lawn, rather than tentatively perching above it on a plank.

19. The photo above was taken in early May, eight months after sowing. The hard work is paying off with a close knit sward forming. From this point onward the lawn needed mowing twice per week. I kept up the hand weeding, which was becoming more a pleasure than a chore.

20. Watering is important following any prolonged dry spell. Infrequent but thorough watering is beneficial so that water can penetrate down to the lower roots, which descend to a depth of 6-9 inches (150-250 mm) in an established lawn. Frequent light watering can actually be counter-productive, encouraging the grass to develop an excess of surface roots which will be more prone to drying out. Deep watering will encourage deep, drought-resistant roots. One word of caution: waterlogged soil is not good as the grass roots will suffocate and die, especially during the growing season. Because my lawn is raised and the top soil not compacted, it is very well drained, so this is not a problem for me.

Here is a close up of the close-knit sward I have achieved in just under one year. It’s even-textured, with no broad leaved grass or other weeds in sight, feels lovely and springy under foot, and is gorgeous to the touch.

WHAT WAS THAT ABOUT VACUUMING THE LAWN?

Oh, about the that – yes, I did run a Henry hoover over it. The reason was that some fine grass clippings had blown onto the lawn during previous mowing sessions on a windy day, and although they didn’t show at the time, they made a rude appearance on subsequent mowings suddenly showing up as fuzzy dead-looking stripes. The vacuum cleared them up nicely, even if I did feel a bit silly doing it. Unexpectedly, it also improved the look of the sward, fluffing up the grass blades in a similar way to vacuuming a velvet carpet.

Just one problem: when the guys stand around in mutual lawn admiration, there is an important, near silent, male bonding ritual taking place. As everybody knows the epitome of masculine lawn management is the ride-on mower, so, I’m suddenly not sure that my quip about the vacuum was really up there as a man-totem.  It’s a tough one, but on reflection, I think the vacuuming was a brag too far.

2 thoughts on “Creating an ornamental lawn”