Continued from The Lawn Garden – 3. The Design Rational 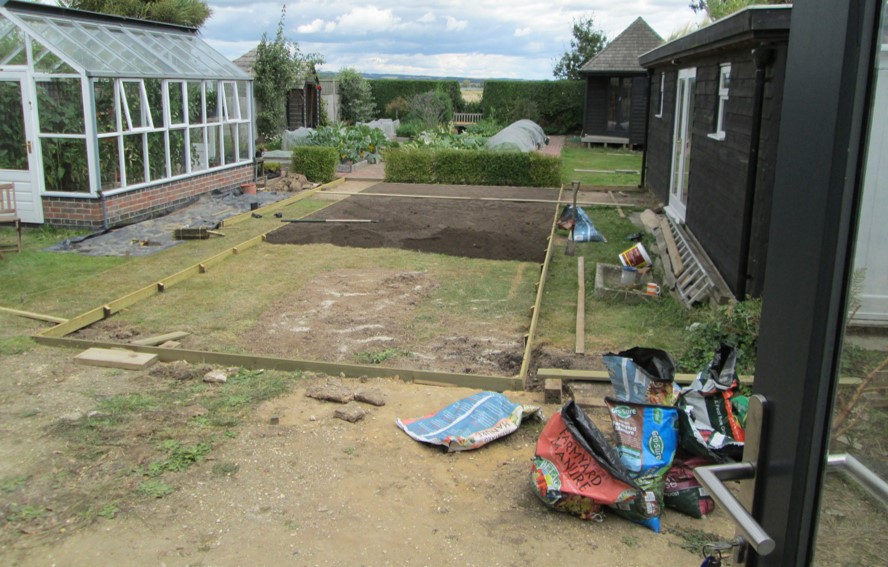 The first part of the work involved laying out the central lawn and the dividing hedge. The new lawn area was raised as the middle of the garden had been prone to water logging, or even side to side flooding, in previous winters. 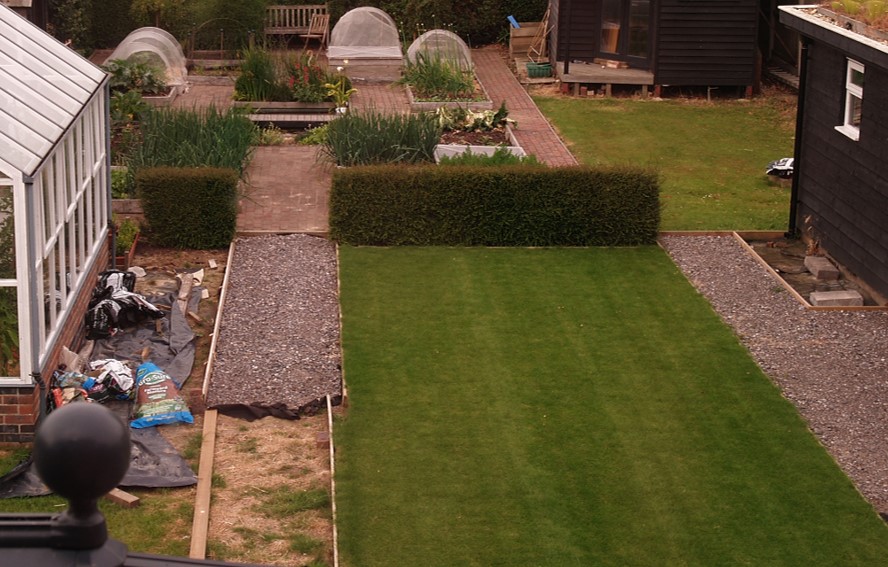 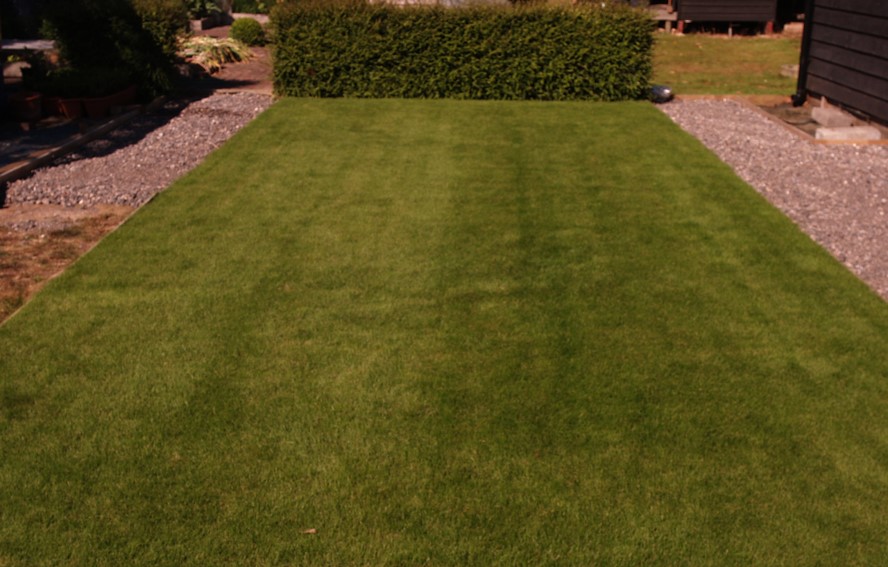 Six months later (June 2016) the lawn is well established and the hedge growing strongly. Although I had started laying out paths we were having doubts about our abilities to finish this job to the standard we wanted in a timely manner. We were totally fed up with the dirt we were treading in, and I wasn’t looking forward to doing the hard landscaping. At this point we finalised the details of the design and went looking for a landscape company to finish the job.

If you are going to employ a company to do your landscaping I recommend you provide a very detailed plan with specifications for the design aspects. Ask them to provide you with the construction spec. Read them over carefully and assure yourself they are going to work to a standard you are happy with. We sort quotes from six companies. Three were above our budget. The forth was much cheaper – like 40% cheaper – but checking their online reviews (over 100, and all 5 star), talking to them, and reading their contract I decided they were no less competent. Wow. It certainly pays to shop around! 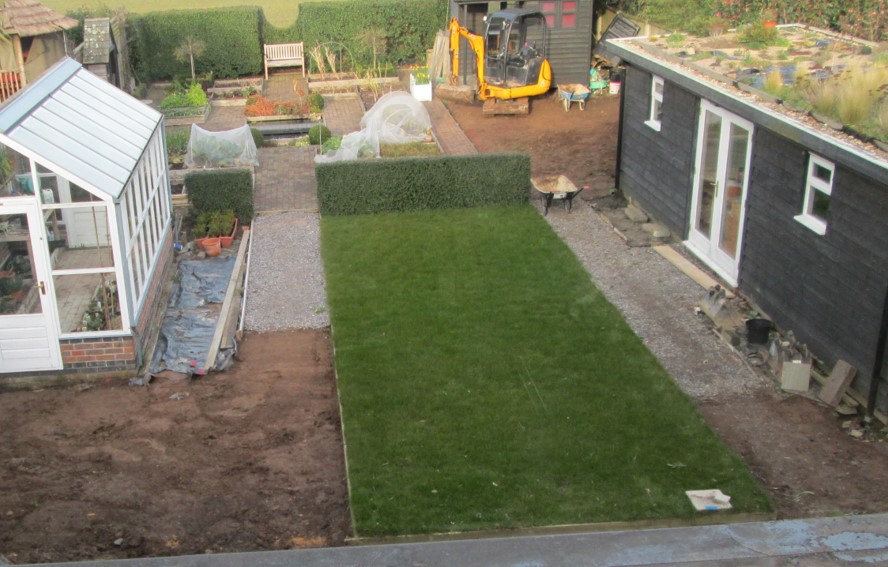 3rd March 2016
That’s their digger, and as you can see the old turf has been stripped off and the site levelled. The grey sub base was previously laid by me before I realised that I didn’t have the time (or strength!) to undertake this job myself. They removed it the next day: 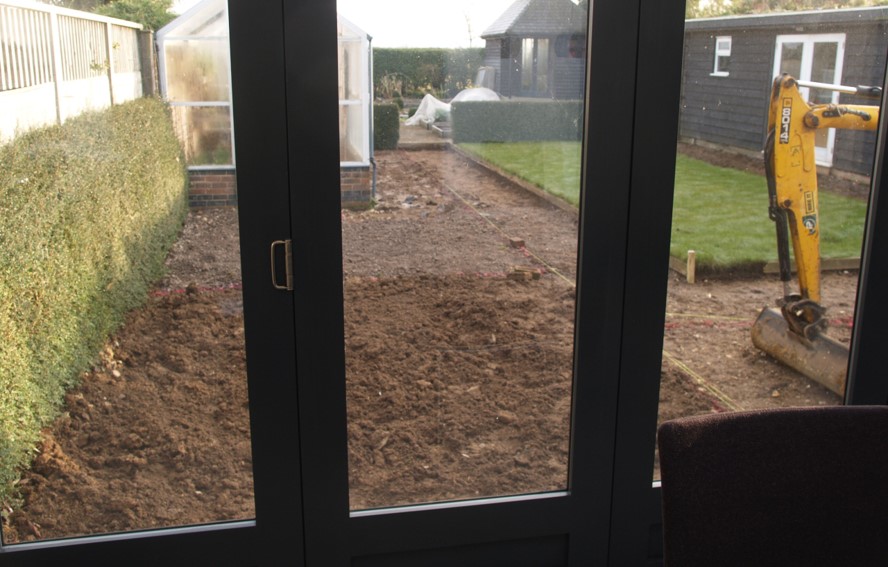 4th March 2016 Looking through the bi-fold windows of the extension dining room. You can start to see how the design will work. Note the hedge we planted along the fence to the right. The hedges are important in this design as they create the green walls to the outdoor rooms, and act as a backdrop to the planting. 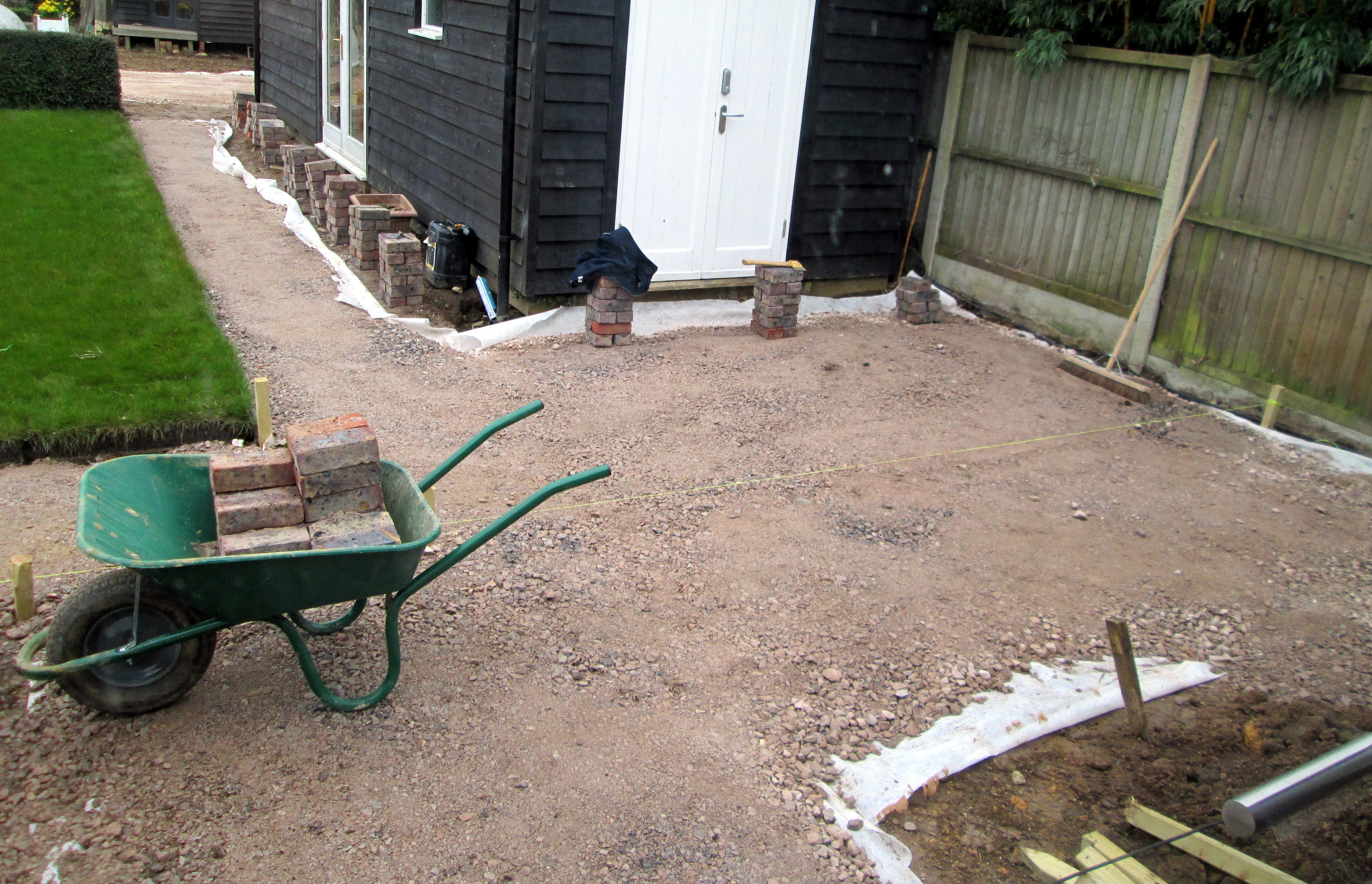 8th March 2016: Type 1 sub-base laid to a depth to ~4in (100mm) depth, then compacted with a whacker plate. Under that sub base is a very strong woven white geo-textile. It’s function is twofold: (1) It prevents mixing of the sub base with the sub soil and (2) it helps spread load and reduce sinking if there is a weak spot. Brick paviors on standby. 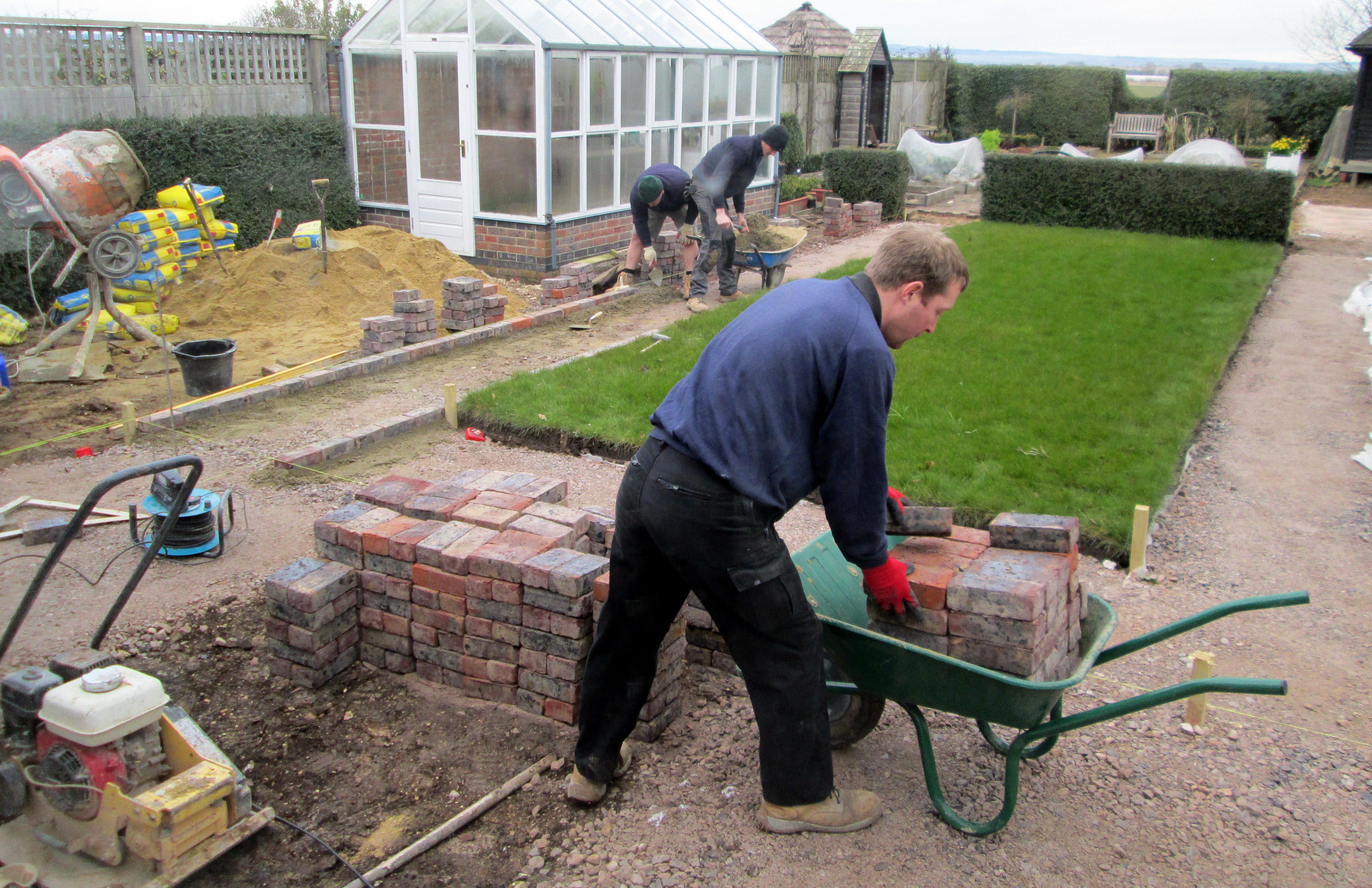 These lads are very hard working, and get an incredible amount done in one day. Here they are laying the edging course of paviors which are cemented in (the infill will be dry-laid on sand). The external edges are haunched with mortar to strong support. 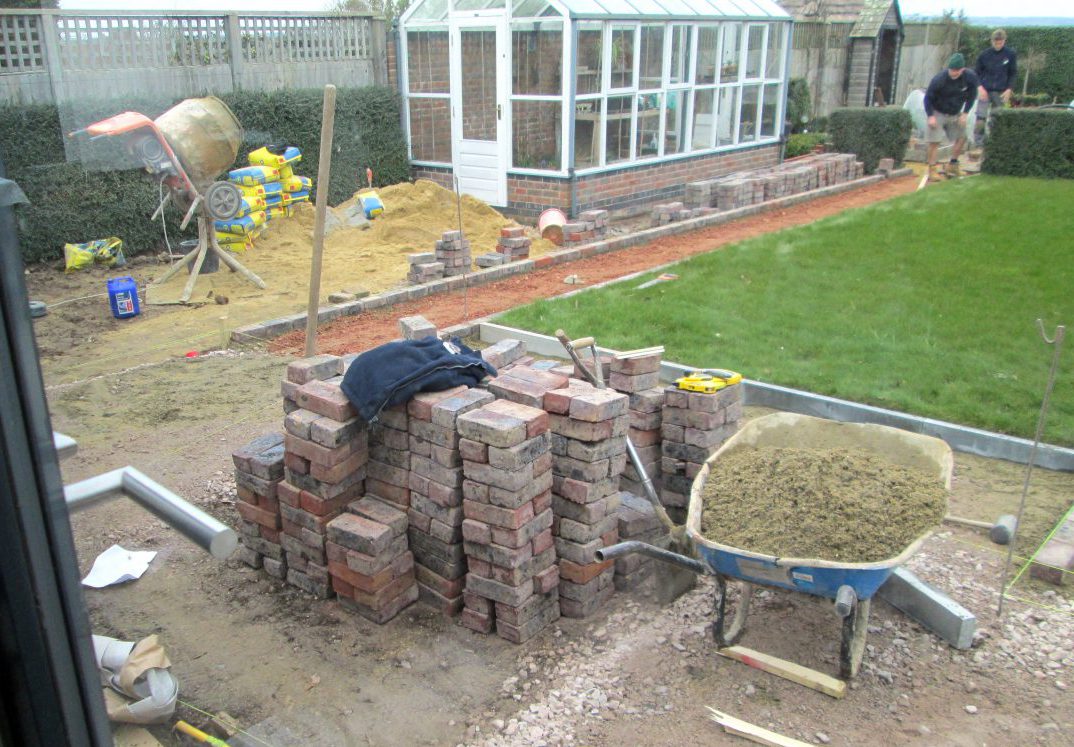 Now they are laying a sand between the edging bricks which will act as the bed for the dry laid paviors. (Sorry for reflections, was photographed through glass). A quick run over with the compactor then lay the bricks: 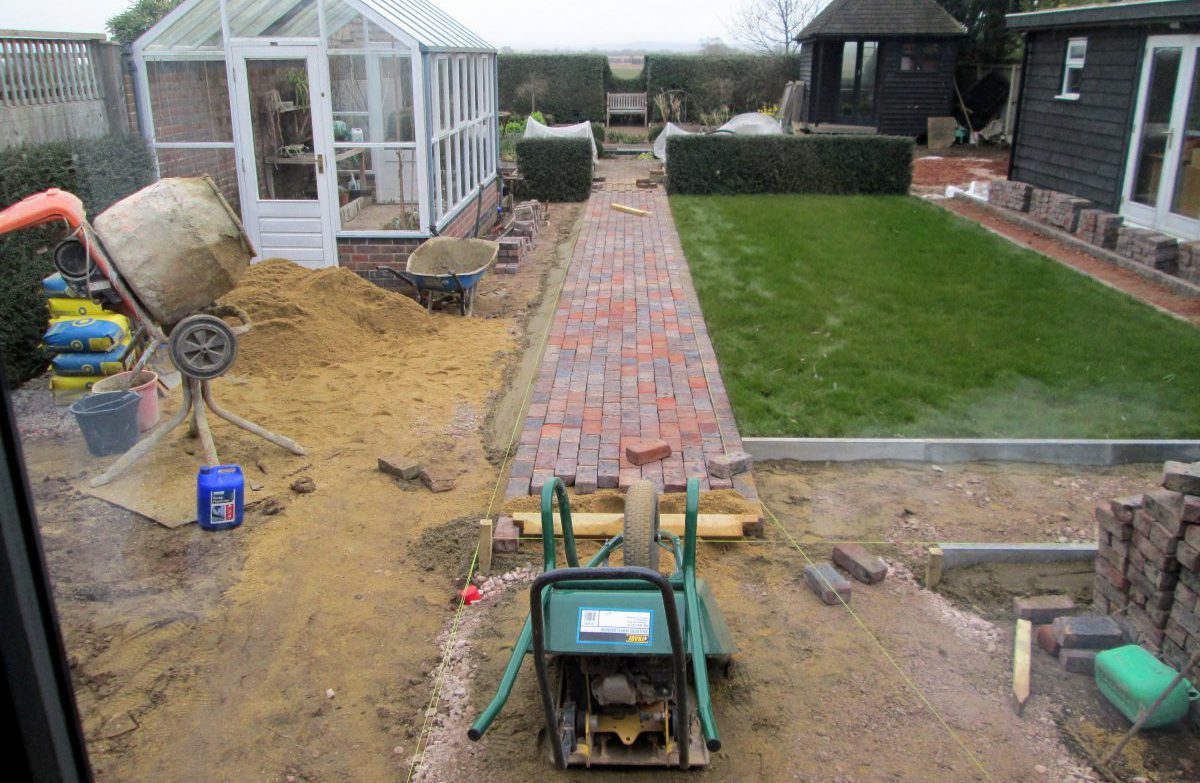 One path completed. (Good work lads!) You can see the substantial concrete haunching down the edge of the path – its not going anywhere soon that path! Notice also the concrete edging running along the front of the lawn. That’s necessary as with the bricks running the same way as the main paths it’s not possible to create an edging row of bricks to contain them. The concrete edging will do that job. 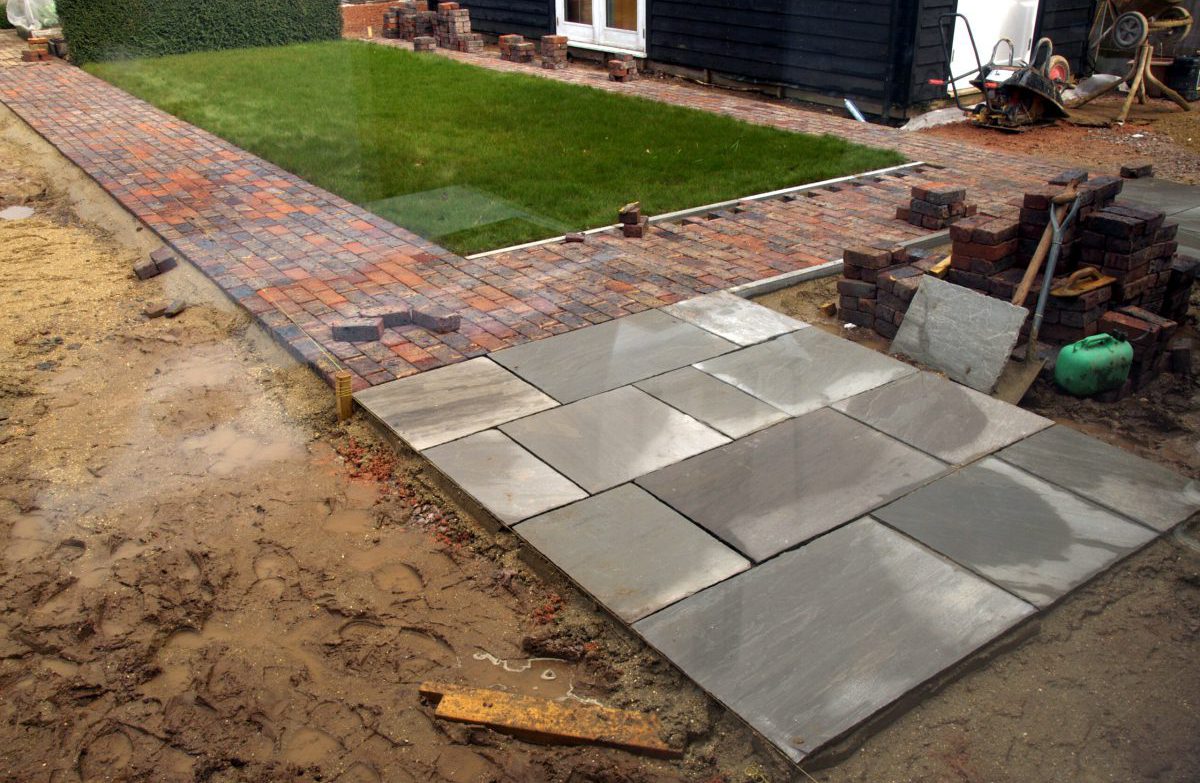 9th March 2016: Despite the rain the team manage to get a section of sandstone paving laid, and most of the brick path completed. 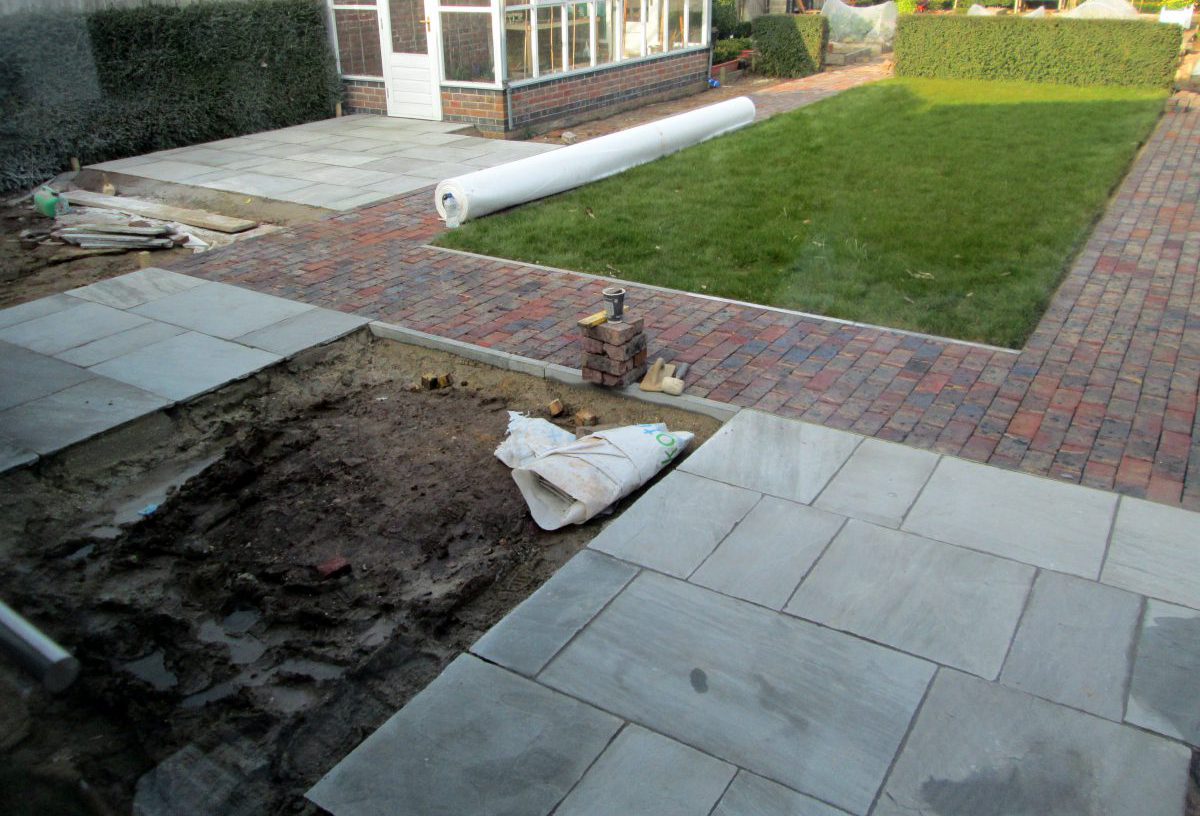 11th March 2016: The paving is finished and the brick path. A modern permeable jointing compound is used between the slabs, helping water to drain away easily. 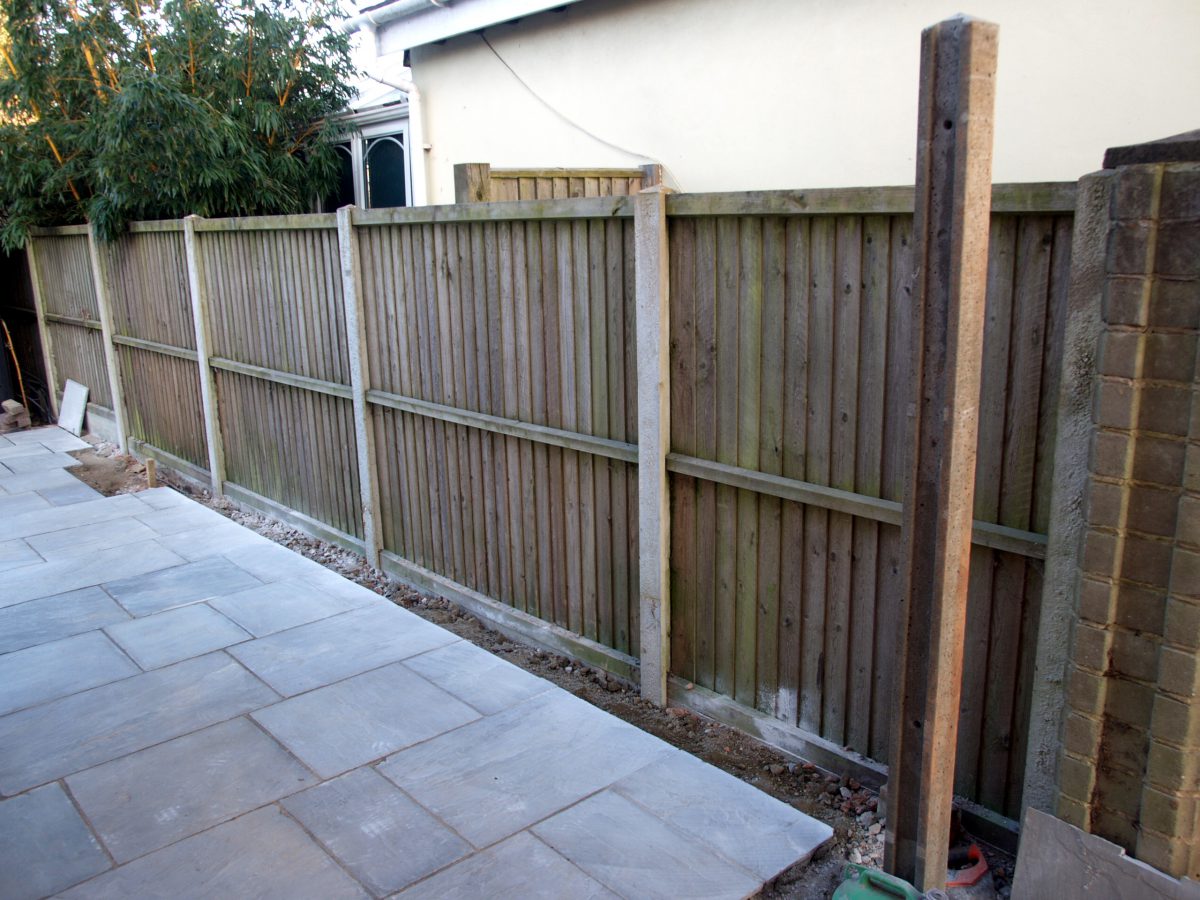 14th March 2016: The side passage is paved and they have concreted in two concrete posts for me, which I will use to construct gates across the passage here forming a utility area for storage, gas cylinders and bins. 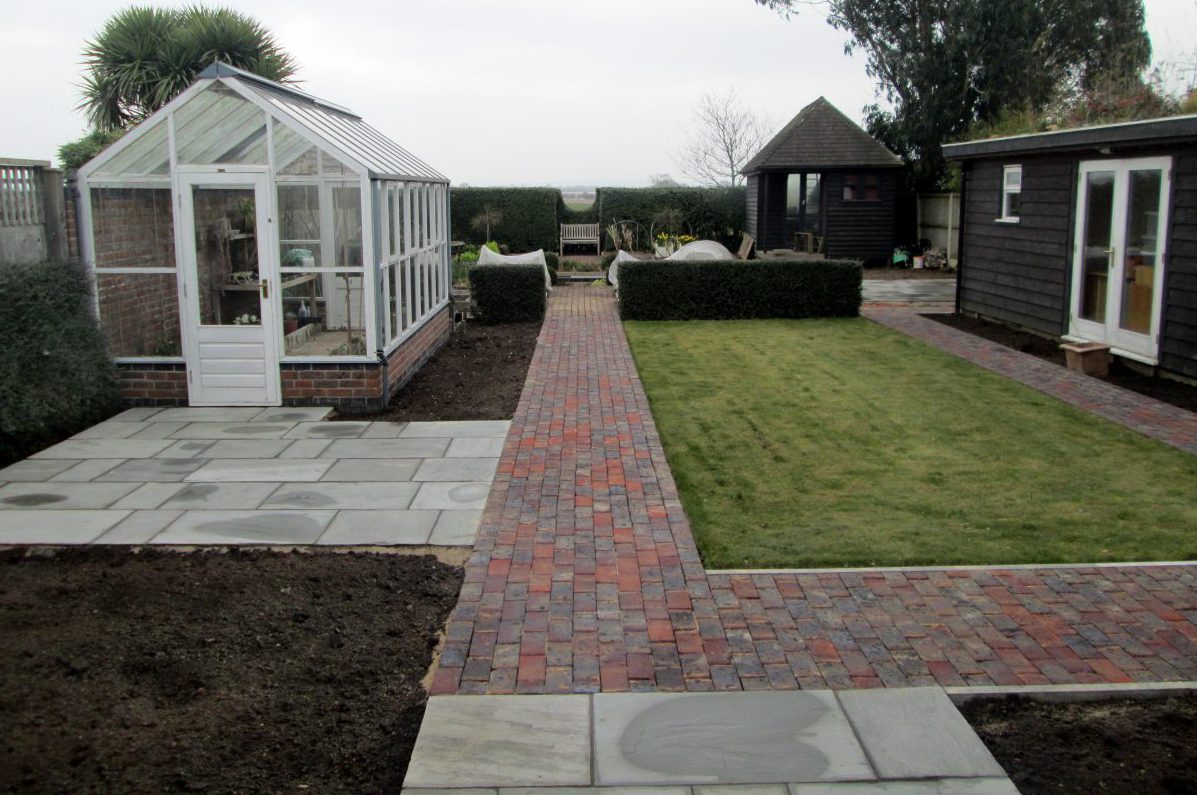 And what a transformation: