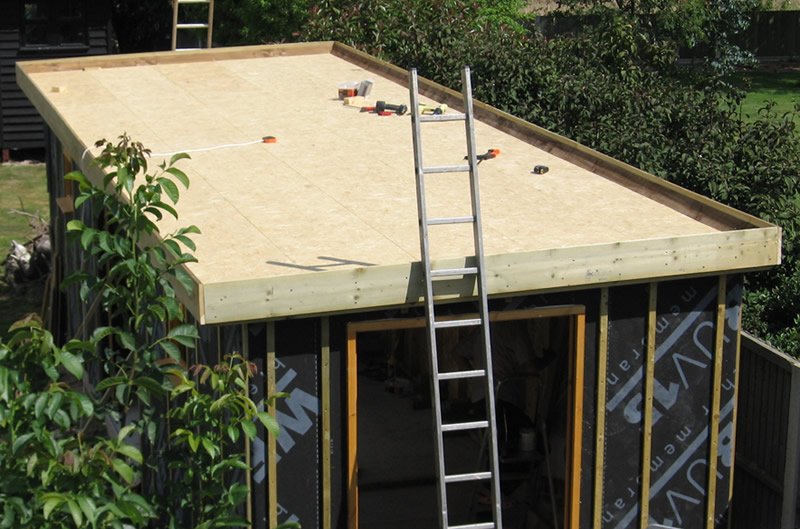 PART 5: Construction of the green roof: base and liner

The deck was laid with 16mm Smartply (OSB) decking boards. This was a nice job as these boards are matched (T&G) on all four sides and slot together tightly. They were then screwed down to the rafters, quickly making a firm roof deck that could be walked on whilst it was worked on.

Arris rail was then attached all the way round by screwing through from the underside (see below, right) and 8″x1″ fascia boards screwed to this to form an up-stand.

I fitted flat-roof rainwater spigots into each end of the front of the roof. To prevent pooling behind them they needed to be recessed flush – a router came in handy here.

The one-piece, 1 mm butyl liner was supplied from a DIY flat roof company – you simply give them the roof dimensions and it arrives in one (extremely heavy) piece. Getting it up on the roof was one of the hardest parts of this whole project! However, once up it was relatively easy to install. First, glue was applied over the timber deck, then the liner was rolled out and pressed into place with a broom.

In the corners a fold was necessary. The only cuts made were for the rainwater spigots, and here the butyl was bedded onto a ring of mastic to seal it (below, left). The edges of the liner were folded over the top of the 8″ fascia board then pinned in place by a 4″x1″ timber that was screwed flush with the top of the fascia all the way around. Any excess butyl was cut off, leaving a neat finish.

Pond underlay was then added as an overlay (see above, right). This protects the butyl from the gravel that is used to create the drainage layer that comes next. (Although it is called pond underlay it is just carpet underlay as far as I can tell!)

A treated timber retaining frame was constructed to eventually hold the soil. It is raised 1cm on short posts and it sits under its own weight on the underlay. Within the frame pea shingle was placed in a 20mm layer to create a drainage layer. Around the outside 20-40mm angular shingle creates a plant-free border that ensures free drainage to the spigots. Note that the spigots have leaf-guards, primarily to keep the shingle out, and these need to remain accessible so they can be easily checked and cleaned if necessary.

Before the growing medium, the inside of the frame was lined with woven landscape (weedproof) fabric. This prevents soil washing down and blocking the drainage layer. The growing medium was then lifted, bucket by bucket, up onto the roof. This was the most exhausting, repetitive job and took much longer than I expected! The growing medium I used was supplied by Aldingborne Nurseries and consists of 50% sand and 50% recyled green compost. Good green-roof growing medium should be low fertility and free draining (hence the sand) and water retentive, (hence the compost).

Finishing touches included a 6″x1″ faschia board screwed to the 4″x1″ around the edges, and finally, a 4″x1″ capping rail that frames the whole roof – we painted it a contrasting white.

Here it is, finished with some of the early planting installed:

Cladding the outside: timber boards and stain; bitumen corrugated boards to rear…

Find out more about the green roof here»

7 thoughts on “The Workshop Construction: The Green Roof”