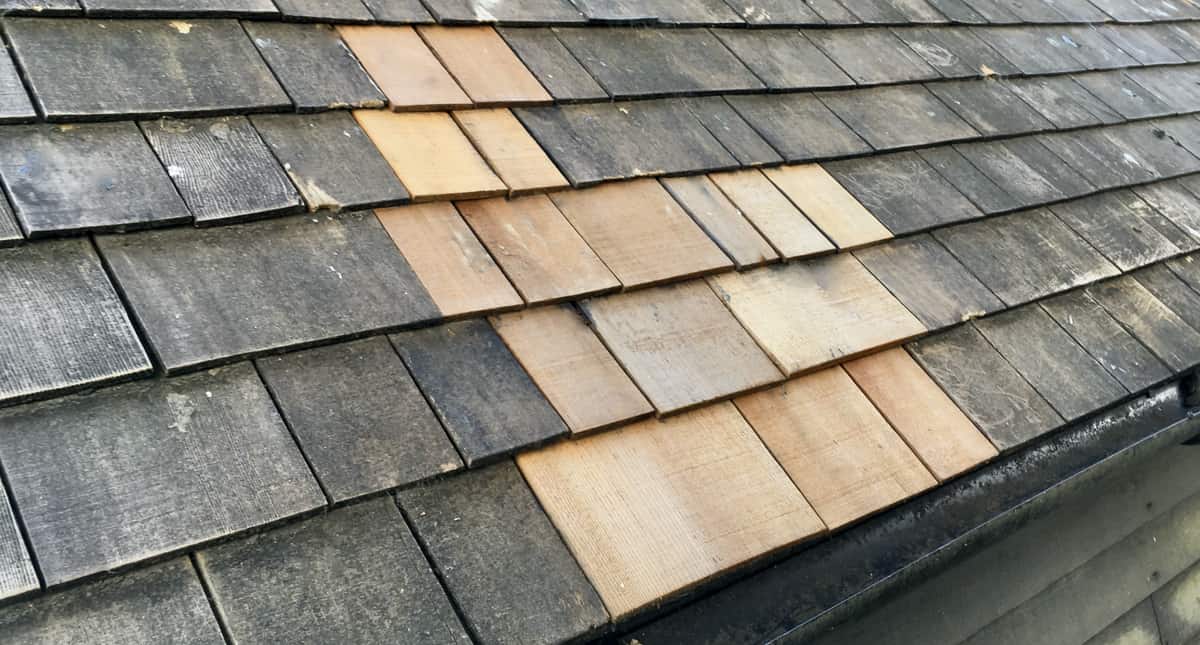 Two of my garden buildings (plus an arbour) have cedar shingle roofs. These have performed well for over 15 years. So well in fact, that I took them for granted and neglected them. When I finally got round to looking carefully at them this year I found a range of problems (detailed in my last post).

Having fixed the gutters, cut back overhanging trees and cleaned the tiles, I was faced with the fact that several shingles had begun to rot and would need replacing. Fortunately, I had a box of spares from the original build which were in perfect condition. This post details the techniques I used to replace the damaged shingles.

1. Identifying the scope of the problem

The photos above show the part of the roof where rot had taken hold. It was located in a section of the roof that was out of sight and heavily shaded by trees. The shingles were damp, encrusted with moss and algae and in places crumbled when brushed. Minor erosion above and below this patch suggested the problem was more extensive.

As I started pulling and poking around I realised that the rot had got into several shingles. The only solution was to remove the affected tiles one by one and see exactly how far the damage extended.

Before starting I had to refresh my memory about how cedar shingles are fixed.

Knowing how cedar shingles are arranged and fixed is important for understanding how to mend them. The following diagram illustrates the standard structure of a cedar shingle roof:

Shingles are normally nailed to tile battens with two annular ring nails about one to one and a half inches in from their left and right edge, about six to eight inches up from their lower edge (depending on the going – the space between courses).

The row above is then nailed in a similar fashion with the lower edge of the shingles covering up the nails of the row below by about half to one inch. Furthermore, the fixing nails of the upper row pierce the thin tail end (upper end) of the tile below.

Consequently, each shingle you attempt to remove is fixed by two main nails which are tucked just under the shingle above, These can usually be seen by gently lifting the front edge of the tile above, taking care not to break it!. As well as these two nails there the shingle you want to remove is also held by one or more nails even further up and well out of sight.

Now we understand what we are up against the following techniques will make more sense.

Below are the techniques that I found most suitable for DIY repairs without recourse to any specialised tools.

NOTE: When it comes to larger shingles that are only damaged on one side, it is sometimes possible to split them cleanly, leaving the good portion in place as a narrower shingle. Just check that the newly created edge is at least 1 ½ inches (4cm) from the joints of shingles above and below to maintain sufficiently staggered joints.

As mentioned in point 5 above, a shingle (or a split piece of shingle) may be held further up at its thin end by one or more nails from the row above. To free it from these rear nails, shingles can be pulled down ripping them around the nails. The thin wood at the back of the shingle will tear (or rip) as the shingle is pulled away, removing it cleanly from these otherwise inaccessible fixings.

Once a shingle has been split into several vertical strips, the ones that are only nailed at the top can be ripped out as shown above. This involves pulling the piece downwards so that the tail (thin end) of the shingle tears around the nail. Sometimes this can be done just by pulling by hand, but more often it requires additional force.

In this case grasp the bottom of the piece with pliers (as shown in diagram above) then strike the pliers with a hammer to increase the downward force. Get the blow right and the tile moves down half an inch (1cm) or so with each strike. Several more strikes with the hammer and the shingle comes free.

Here’s me succeeding with these techniques

This tool is designed for removing nailed slates and tiles so it should work for cedar shingles.

The notched end slides under a tile you want to remove, while the hooks enable nails to be snared. Once caught, a sharp hammer blow to the handle will yank the nail out (or even shear through it)

I made my own out of an old steel rule cutting a couple of notches into it, but found that the nail bent, damaging the shingle above. Perhaps the proper tool would perform better?

Once you get a shingle out, the heads of the two main nails will be visible just under the edge of the row above. These need countersinking so that they are not in the way when you come to put the replacement shingles in.

One trick is to use a flat metal implement such as a chisel which you can get under the edge of the shingle, and rest it on top of the nail head. You can then strike the chisel with a hammer and knock down the nail head (or bend it over as I managed to do rather too often!)

An alternative to hammering the nail down is to pull it out using a crowbar or tack lifter, but this can be difficult for two reasons. First, typical shingle nails are 40mm long so can only be removed vertically if the shingle above is sufficiently flexible. Secondly, the surrounding shingles can be easily damaged by levering action, especially if your lever against an section of shingle unsupported by tile batten.

Careful use of a suitable clawed tool (such as a small crowbar or tack lifter as shown below) can work provided you use a block of wood to protect the shingles below. Edge the nail out slowly with a controlled action so you do not excessively raise the shingle above and snap it.

Tip: I also found it possible to pull some nails using long nosed pliers. The trick was to grip the nail below the head and then twist (roll) the pliers, thereby bending and nail over while pulling it out. This minimised the chance of damage to the shingle above.

How many shingles need to be replaced?

As damaged or rotten shingles were removed it became easier to evaluate the extent of the damage. In my case there were several courses below the main area that were affected and had to be removed, as well as most of those abutting to the left and right. I stopped once I had found good, solid shingles (above, right) or ones that only had superficial damage.

When working from a ladder on a low roof you can make a bodge up a shelf close at hand to keep your tools on.

Place a couple of shingles (or an offcuts of plywood etc) between the gutter and the eves and use a block of wood to level and wedge it in place.

Once the old damaged or rotten shingles have been removed it is time to replace then with brand new shingles. There are a few tricks that help with this, which I will outline below:

Shingles are replaced from the bottom up. In the picture above I am sizing up a new shingle and checking that it overlaps the shingles below sufficiently, so that gaps are staggered by at least at least 1½ inches (4cm) to maintain watertightness.

Ideally, you would replace each shingle with one of identical dimensions so that the overlap pattern remains the same. This may be possible if you took measurements before hand, or if only a few shingles had to be removed. In this case you can cut down wider shingles to get exactly the sizes you need.

In practise, especially when you have a large area to replace or when you do not have suitably sized shingles to replace like for like, you are going to use what you have and try to create a new lapping pattern with them that works. This can be quite challenging.

In such a case, it is necessary to plan out several combinations of widths along a row, and check the implications for the row above. If you are not careful, you can rush ahead and fix several shingles only to discover that you have created a situation where it is impossible to fill a gap without ending up with poorly aligned joints. If this happens you have no choice but to remove the shingles you just fixed and try a different combination. A bit of planning can save a lot of extra work later!

Here are some photos of these techniques during my project

As you can see towards the top of the repaired area the joints are getting rather close together. This was simply because I was using the spare shingles I had at hand. Ideally I would have purchased a new bundle and used wider shingles instead of two narrow ones in a number of places.