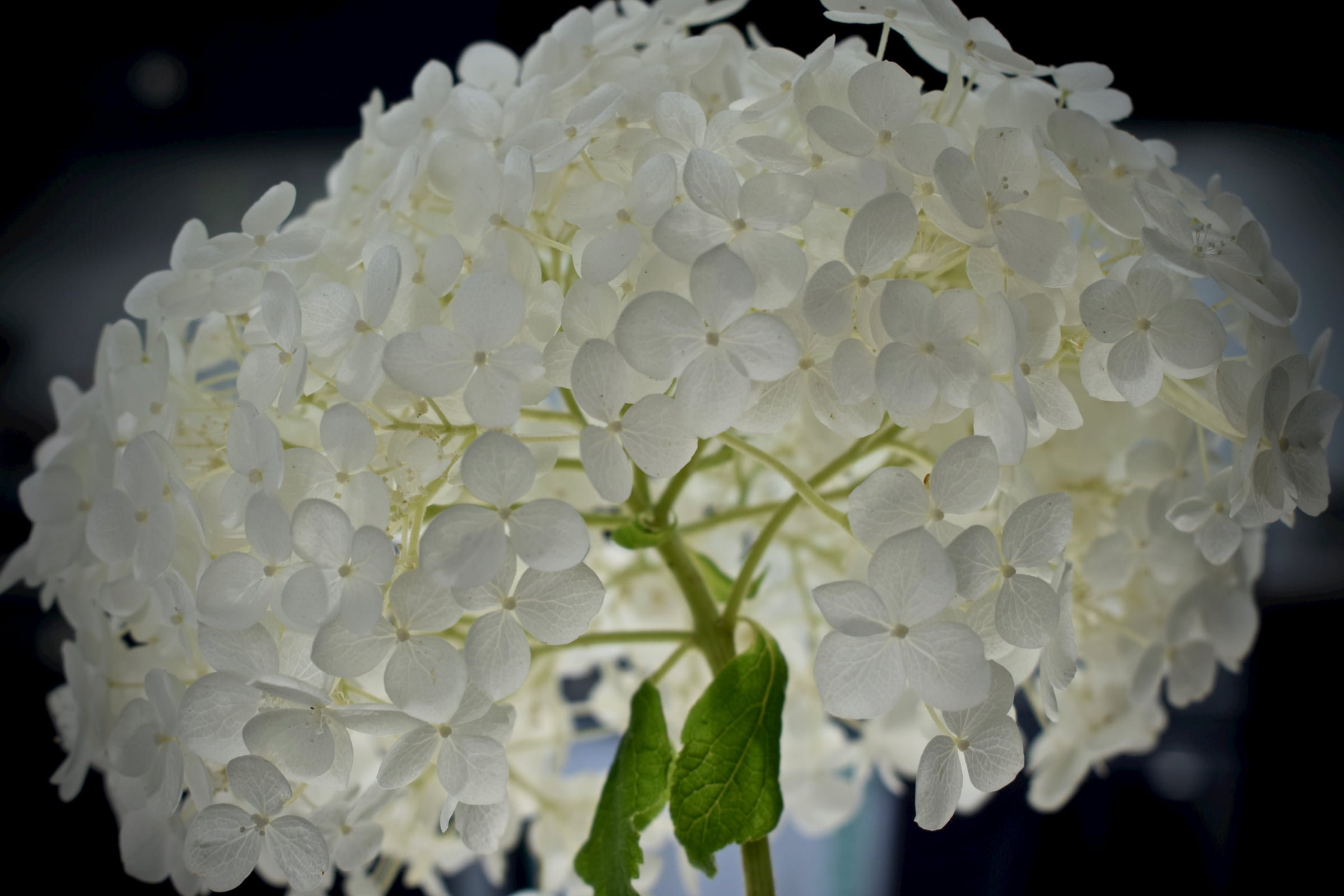 Hydrangea Annabell
produces good cut flowers up to 30cm across

People seem to have mixed feelings about hydrangeas. Before I started designing gardens I had a rather negative opinion of them myself, mainly because of the ubiquity of the blue and pink mop-heads that seemed to adorned virtually every front-garden. My main impression was that they were style-free, dull shrubs with no particular virtue (even the word ‘shrub’ sounded drabness). Since then I have learned to love them.

The main reason for changing my views were (1) seeing them used effectively within a meaningful design; (2) An appreciation for their long flowering season and easy-going nature; (3) Their responsiveness to pruning; (4) Their ability to blend in to a scheme more like a herbaceous perennial than a shrub; (5) Their charm as cut flowers: luxurious and long-lasting; (6) The huge variety of interesting species and forms beyond the bog-standard mop-head. Oh, and (7) they come in white. White flowers are classy. White hydrangeas are super-classy.

Hydrangea macrophylla is native to Japan. The ‘big leaf’ hydrangeas come in mop-head or lace-cap varieties. The lace-caps have large, sterile outer florets, with smaller insignificant fertile flowers in the middle. Normally, the outer sterile florets consist of four plain petals as shown in the illustration (left). H. macrophylla “Koria” is a lace-cap but has unusual crimped outer petals which produce a starry effect on the bush.

Unfortunately — and it is a problem all of the white macrophyllas suffer from — the flowers are not a pure white, firstly because the central fertile flowers have a mauve/pink tinge (depending on soil pH) but also the outer infertile flowers pick up the colour too which gets stronger as the flower ages.

Because of this I have moved my plants out of the white garden and into the rose bed where Koria’s changing colour palette can be put to use: I have paired it with a Rosa Iceberg (which is a white with a slight pink blush at times) and underplanted them with purple geranium “Rozanne” which, like the hydrangea, flowers all summer.

There are many varieties of white mop-head hydrangeas. The two I have in my garden were not labelled with a variety name as they came from a florists shop where they were sold as pot plants simply as “White hydrangeas”. Florist varieties are forced to flower unnaturally with large heads on small plants often out of season, but these can be planted out in the garden after flowering where they will settle back into their natural rhythm and flower year after year.

I love the way the petals begin light-green and tightly packed, gradually opening like a series of butterfly wings until each head creates a little spherical bunch of four-petalled trumpets. The flower heads are bigger on older plants, especially if they are cut back hard in the spring, causing them to throw up long, strong stems which carrying fewer, but larger flowers. Light pruning, conversely, will lead to more, but smaller heads.

White mop-head hydrangeas generally open a good clean white, untinged with any mauve shades typically seem in the lace-caps. However, this only lasts for a few weeks, after which they start to take on pink, mauve or blue tinges, finishing the year with quite a bit of colour in their petals before finally browning. If you need to keep a pure white colour you will need to remove the flower heads once they start to spoil the look, alternatively, place them in a mixed colour planting where their mauve/pink shades will harmonise with other late summer colours.

Hydrangea arborescens, or Smooth hydrangea, is native to the Eastern United States, and is a different species to Hydrangea macrophyla: The foliage is softer, slightly downy, and the stems longer and thinner. This gives it a looser look, more like a clump of some herbaceous perennial: an effect that is enhanced by cutting it down close to the ground at the end of the year which stimulates tall stems to shoot up in the spring.

The flowers are naturally white, whereas H. macrophyla is naturally mauve/pink and has been bred to be white. Consequently, Hydrangea arborescens does not take on mauve coloration as it fades, rather tending to green. This makes it much more suitable for a white garden, which is why I have used it to replace the Hydrangea macrophyla ‘Koria’ plants that I originally had either side of my kitchen door.

The variety “Annabelle” is beloved of designers as the flower heads are very large, up to 30cm across, made up of hundreds of small sterile bracts.

unfortunately, it tends to flop, especially after rain, as the large heads become too heavy for the stems. I am using a circular wire support to help reduce flopping. The occasional stem that bends over far enough to break can be taken as a cut flower. Apparently, as the flowers fade they stay attractive, but I have yet to see this as my plants are still in their first year. In the late winter I will cut them back to 6 inches (15cm) from the ground.