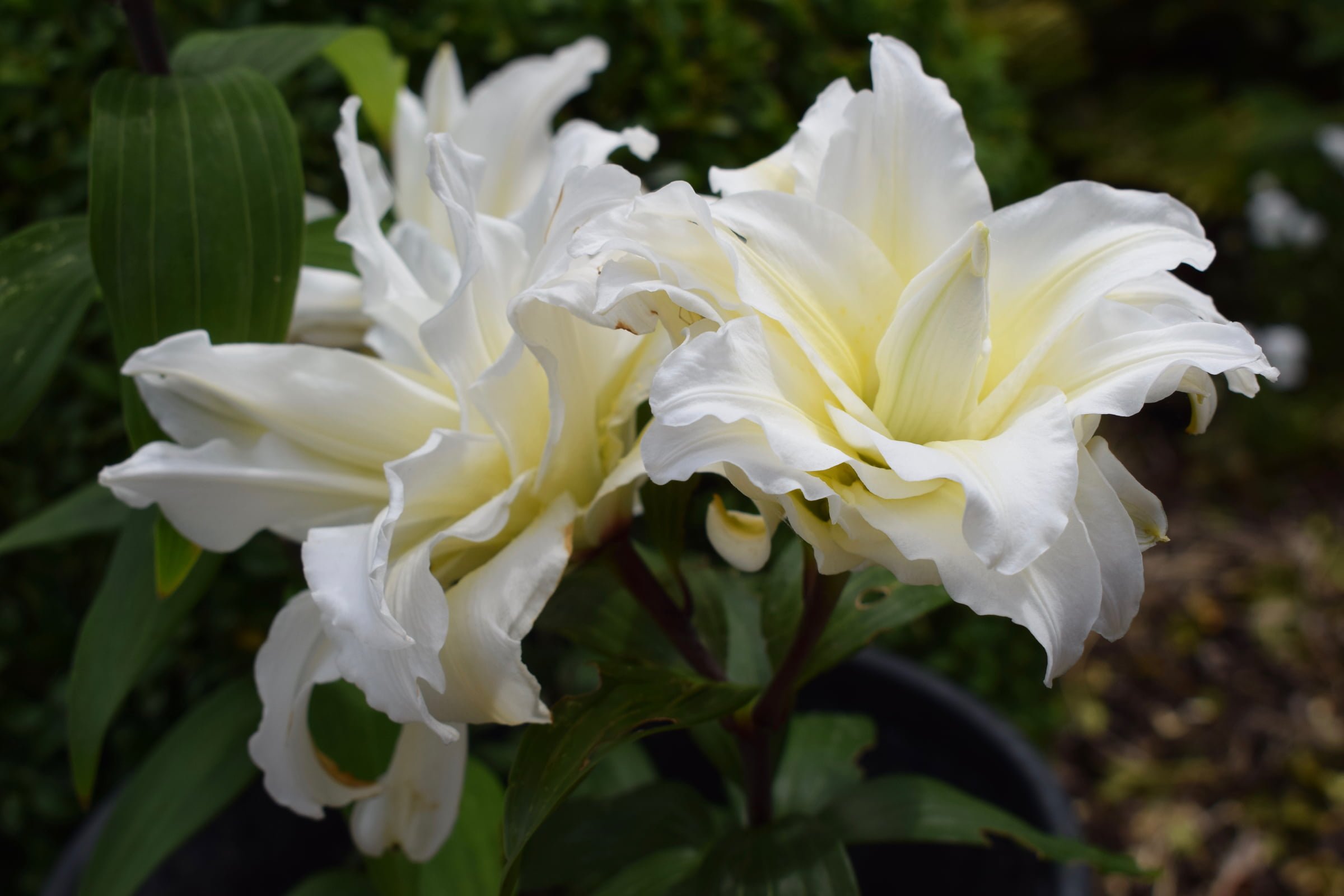 The Roselily Series was developed by the De Looff brothers who began in 2001 with a chance double-flowered Oriental lily seedling. From there they embarked on a breeding programme which led to the development of a whole series of double-flowered, pollen-free lilies. Like single-flowered oriental lilies the Roselily series has a sweet perfume, lush, recurved petals and strong upright growth, but do not cause the infamous pollen staining associated with normal pollen-bearing lilies. This makes them particularly good for cutting and appreciated by florists. The Roselily Series comes in various shades of pink and white, some with speckled throats. The breeder’s website can be found here: https://www.roselily.com

Back in April I found two packets of Roselily ‘Carolina’ reduced from £4.99 to 50p in the garden centre. The bulbs had started to sprout and had a bit of surface mould on them. They were not looking very happy, but at that price I thought they were worth a shot. I carefully potted the four bulbs in a loam based compost, placing them in pairs in two 8in plastic pots. Apparently they prefer an acidic soil, but I just used a standard compost. I planted them 6in deep with some sharp sand under each bulb to improve drainage. Some of the shoots were long enough to protrude above the soil surface! Not expecting much, I left them in a corner and kept them watered.

Gradually the shoots grew: not very evenly, some of the bulbs were apparently less healthy than others, but finally I had three stems with a total of seven buds. The tallest was 16in (40cm). Given a better start these bulbs can throw up stems double this height (80 to 100cm) and can carry 10 flowers each. Perhaps mine will beef-up next year.

Although the flowers are the main attraction, the stems and foliage are beautiful in their own right. As you can see in the photo (above-left) all parts of the plant look healthy, glossy and strong. The purple colour fo the stems bleeds into the leaf stalks and the base of the buds. The whole thing looks quite exotic, and associates very nicely with ferns and clipped box, although to do well these lilies need siting where they get direct sun for at least part of the day.

The opening buds (above, right) are likewise strong and robust-looking and immediately begin to release their scent. The greenish-yellow mid-rib increases towards the base of the petal giving each flower of Carolina an inner glow.

The petals unfold water-lily-like, with the central ones — where the stamens should be — creating a pointed cone. The outer petals reflex gracefully. Between the two petals stack in layers, jostling for position.

Overall, I feel that the fully double Roselilies are less natural and less elegant than the typical single Asiatic Lily flowers. The mass of double petals is rather congested making the flower a bit formless. However, it has so many other desirable qualities that I think I might grow more of them in the future, and even plant some in the ground.

I have found that my white garden looks best where I have clumps of large-headed flowers like dahlia and agapanthus, well-spaced and separated by textured green foliage such as clipped box, hosts and ornamental grasses. Roselily Carolina fits in with this theme really well. I suspect that the flowering season is a little short (July/August) but I can live with that. I have plenty of late-season whites that carry the theme on into the Autumn.