Cherries form fruiting spurs along the older branches. The aim of training is to create a permanent framework of strong branches along which fruiting spurs can flower and fruit year after year. To get the permanent framework right you have to start training with a young tree, and prune and tie suitable stems each year. New growth is pliable and can easily be bent into place but as branches get older and thicker they become increasingly rigid, so it is important to maintain the annual pruning regimen.

The fan is the preferred form for the cherry. The main framework should consist of two or three main branches spreading to each side of the short trunk. The low angle of the branches causes the development of fruiting spurs rather than vegetative (unproductive) shoots. Each year new growth will extend the length of the main branches and they can be trained in to extend the size of the fan. Along the main branches side shoots will develop. Some are short, with flowers at their base. These are the fruiting spurs, and all they need to encourage future productivity is to be trimmed back to 3 leaves in the summer. Other side shoots are more vigorous, and may not have flowers – these are side branches, some of which can be trained in to add to the permanent framework. The remainder are cut back to a few leaves from their base to encourage them to become fruiting spurs.

Cherries, like all prunus species, should only be pruned in the summer (May to July) as one of their main diseases, silver-leaf, is a fungus carries by the winter rains. If emergency pruning has to be done outside these months it is important to pick a dry period and apply a wound sealer to every cut.

Summer pruning consists of the following:

2008 The bare rooted tree I purchased was probably just two or three years old. It was partially trained into a vague fan shape and had a seven or eight whip like shoots. In the summer I pruned these back to the best half-dozen and tied them to 4′ canes, which I then tied to the wires on the fence creating a basic fan shape. By the end of the year it looked like a proper little fan (above left)

2009 During the following summer I replaced the main canes with 8′ ones and tied in the main shoots which had almost doubled in length. I added shorter canes to accommodate the best placed new side shoots to extend the fan. (Autumn 2009, above right) 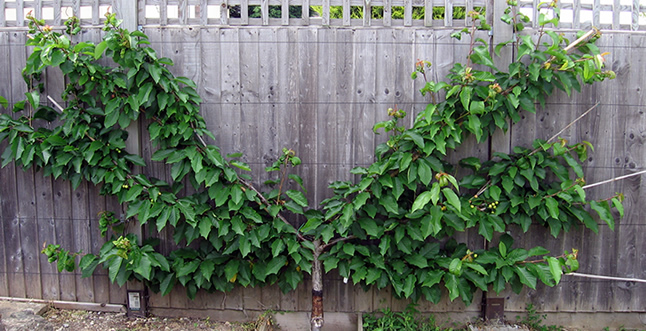 2010  This was the first summer with fruit – you can see them peeping out from among the foliage above. This photo was taken part way through pruning, hence there are a number of stray shoots on the right hand side. Here’s how I dealt with them:

New shoots A and B were pruned back to just a few leaves – this encourages them to become fruiting shoots in future years. Shoot C was the extension growth of the main branch so I tied it to the cane. Shoot D and E were pointing in the right direction to create additional branches for the permanent framework, so they have been left and will be tied in in winter or the following summer.

2011 In the winter I tied in new branches, replaced and adjusted canes and loosened old ties that threatened to strangle the expanding branches. The photo above shows the cherry in April 2011, with blossom and emerging leaves. In the top right you can see shoot D and E (mentioned above) tied to their new canes, contributing to the expanding fan structure.

I will keep this post updated as the cherry develops. Exciting, eh?