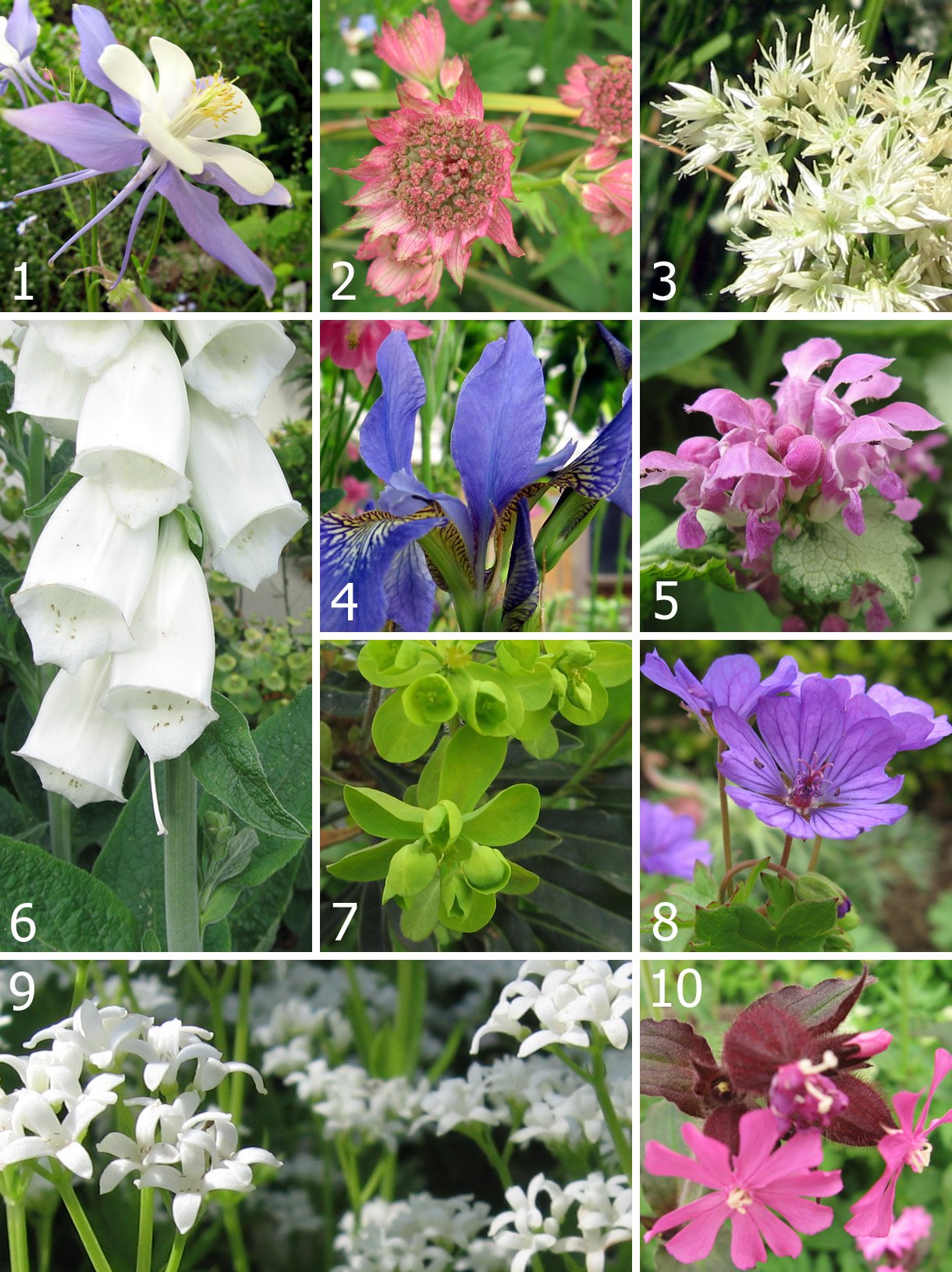 Woodland gardens are often spring events, as many plants scramble to flower and set seed in the brief window of opportunity before the overhead leaves close the canopy. For the woodland gardener then, the challenge is to find plants that extend this all-too-brief season and provide a succession of interest further into the year. One of the tricks is to plant hedgerow flowers along the brighter woodland edges. Here are some of my early late spring and early summer woodland stars…

1. Alpine columbine (Aqueligia alpina var.) In my woodland garden columbines provide the last big flushes of colour in May and June. This delicate alpine variety has such an intricate bonnet that it startles visitors even when faced with the competition from its far bolder, but coarser common relative a. vulgaris.

2. Hattie’s pincushion (Astrantia major) I grow this at the edge of the woodland, where it gets quite a lot of midday sun. Its distinctive flowers with their papery bracts make good cut flowers, and if given the ‘Chelsea chop’ in late may, reward one with a second flush a couple of months later.

3. Snowy woodrush (Luzula nivea) Looking at the photo above, you would never guess that these were the flowers of a grass! OK, I know Luzula species are woodrushes not true grasses, but even so when they are at their best like this they put on quite a show. They are easy to grow, seeming to enjoy shade in any soil. Late in the year I cut them back, foliage and all, to a neat stumpy mound, which regenerates happily the following spring. Overall a great British native which lends that naturalistic air that only grassy things can do but with significant flowers!

4. Siberian iris (Iris sibirica blue form) Iris sibirica seems to cope with more shade than many irises (except of course our native gladdon which manages in really deep shade). I have two varieties, the one pictured here managing at the foot of the mature cherry tree, where dappled sunlight is minimal and the shade perhaps 90%. It flowers in May and early June, for a fleeting two or three weeks – but what a sight! The foliage is worthy of mention – emerging late in April, it is initially fresh green and upright, rising almost straight up from the ground. The flowering stems carrying one to five promising buds, which are beautiful even before they open.

5. Spotted dead-nettle (Lamium maculatum ‘Beacon Silver’) These deep pink, lipped flowers are typical of the labiataes (mint family), however, they are quite small and close to the ground, so you need to get down to their level to really admire them. Their foliage is silvery and the plant spreads gradually to create a handsome groundcover around the base of taller plants. It’s weedy origins provide it naturalistic charm whilst its variegated foliage raise it to garden worthiness.

6. White foxglove (Digitalis purpurea alba) There are few people, surely, who would argue that this is not the loveliest form of our wild foxglove? Unlike the overblown hybrids it retains the delicate charms of its wild cousin, chief of which is its asymmetric spire with flowers hanging predominantly from one side. Also, unlike many foxglove cultivars, it comes true from seed – so once established it is likely to stay with you for some time. The colouring of foxgloves extends to other parts of the plant, so even the foliage has a grey-white blush to it, unlike the common purple foxglove which has redder hints in the leaves.

7. Wood spurge (Euphorbia amygdaloides) I have not confirmed the identity of this plant. It has appeared on its own in two places in my woodland garden. I assume it is the native wood spurge, as that grows in these parts, prolifically for example, in the woods at Chichester harbour. Its benefits are a strong constitution, evergreen foliage and plenty of yellow-green flowers which shine in the shade, lighting up the bed. What a welcome freebie!

8. Hedge cranesbill (Geranium pyrenaicum) is a naturalised UK resident, superficially similar to our wild Herb Robert (G. robertianum) with sprawling stems and sparse leaves and tiny mauve flowers that open in succession from bunched buds. Unlike Herb robert, Hedge cranesbill is perennial and more floriferous, which is useful, but it is also somewhat unrefined, which isn’t. Now I have thought about it, I’m not sure I really like it – I’d rather have real Herb robbert on the other hand it does provide hazy flowers for minimal ground space and effort!

9. Sweet woodruff (Galium odoratum) is a low growing (15cm) British native, vigorously colonising, semi evergreen carpeting perennial, with pointed leaves in whorls around upright stems. In May it creates a sea of foaming white flowers individually tiny, but numerous. One problem with woodruff is its enthusiasm for spreading as it advances its carpet a couple of feet each year by underground runners, swamping smaller plants and dominating the overall composition. I pull swathes of it up to control it several times a year. It springs back, unharmed, but at least its rampage is partially checked – You have been warned! That said, I have seen it looking very charming in willow planters with pansies and spring bulbs – pretty, naturalistic, and importantly, trapped!

10. Red campion (silene dioica) Another British perennial, suitable for naturalistic gardening, beloved of insects and quite late flowering, even in shade. Its flowers have a good strong pink that brings much-needed colour into the woodland composition mid-summer. It has two weaknesses for me, that make me treat it brutally: first, I find it can be a magnet for blackfly some years and they go for the buds, which spoils it rather. (At such times I cut it back hard and the second flush of flowers may escape infestation). Secondly it is surprisingly vigorous far more so than in the wild and can easily grow to 1m tall, by nearly as much across. I just pull it out or cut it back to suit the garden composition as a whole.