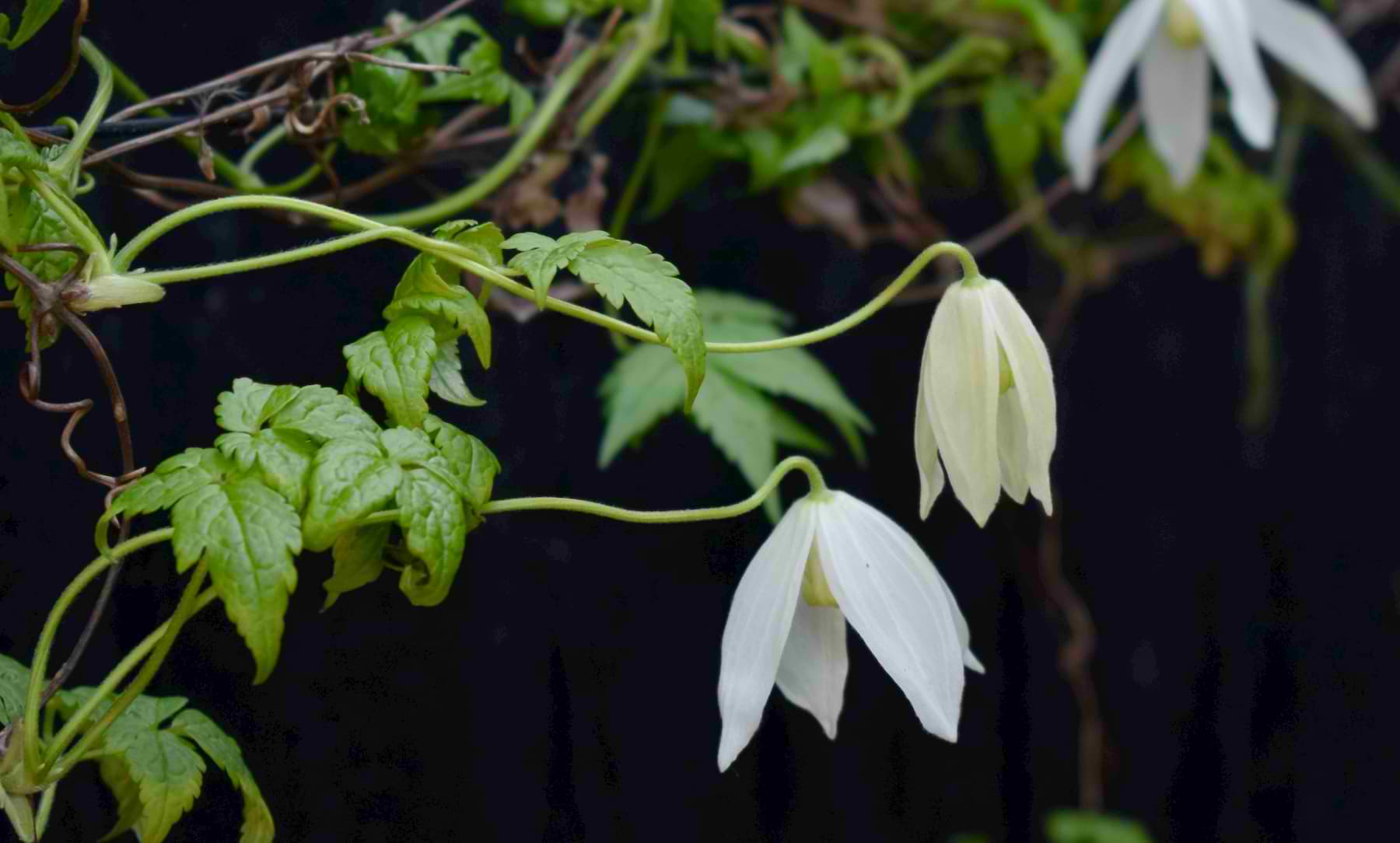 I planted this white form of the alpine clematis in a shady corner against a fence a year ago. Its naming is rather obscure with the RHS preferring C. Sibirica, whilst others call it C. alpina subs. Sibirica. Anyhow, it is a very hardy clematis able to thrive in a cold shady location such as a north facing wall, so for me it was an ideal variety tucked down the side of my house. I have trained it up on nylon Gripple wires spaced about 14 inches (35cm) apart in rather an unusual way…

Clematis are generally untidy scrambling vines, clinging by wrapping their leaf stalks around anything they can get hold of. Given a trellis or adjacent shrub, they will quickly ascend and spread out in a fan shape with most of their growth forming a messy spreading ‘bun’ at the top with straggly and often bare stems below. This is reflected in the given plant dimensions of 8ft x 3.5 ft. However, I wanted to see if I could train mine far more neatly so that it covered one or two fence panels. I therefore needed it to stay tight to the fence while remaining broad and leaf-clad at the bottom. By training shoots horizontally along wires I have ended up with a rather geometric pattern which is quite a feature in its own right. Not your typical clematis at all.

PRUNING: C. alpina Alba is in pruning group 1, so does not need regular pruning as it flowers reliably on old wood. Getting the initial training right is important as it can’t simply be cut back to shape in future years.

Here it is the year after I planted it, flowering in April 2020 (below, left) You can see in the bottom picture how far it had spread by August of the same year:

As you can see this approach is working well so far. The lower tiers are broad and well clothed in foliage. To achieve this I have to keep tucking in new shoots which appear and head off in some random direction. I simply wind these as tightly as I can onto the wire from which they emerge, directing them left or right to fill in any gaps. Some are trained vertically (near fence posts) so that they can fill in higher tiers. If I don’t spot a shoot soon enough their leaves start to wrap around some nearby support. I cut these tendrils off and tie them in where I want them.

The lower two tiers actually continue to the right of the photo above by another 6ft, but I currently have a wooden plant stand in the way. I still have space for have another two tiers which will give me six in total, but I am in no hurry to fill these as I want the lower part to become strong and dense. Plants tend to divert their resources into the highest growth, often at the expense of lower parts. By building up the height gradually I hope to have an entire 2m “wall” of flowers in the future.

The flowers of C. alpina Alba are delicate nodding and natural-looking. The four simple petals are each two inches (4cm) long, but never open fully. It produces its first, main flush of flowers in April and May, with a smaller second flush in August or September if you are lucky. Mine produced just a single late bloom, but it is still a very young plant.

After a long cold spring, foliage and flowers began to emerge at the end of April. I was a bit surprised that long sections of the vine remained leafless. There is no obvious reason why — perhaps an effect of the late frosts that knocked back many plants in my garden this year — but whatever the reason, it suggests that clematis alpine might really lend itself to the semi-formal treatment I had intended.

As the year progresses I am sure that I can continue to weave new shoots in to fill in the bare patches, but it may well be that trained on wires, it will never look its best at flowering time, which will be a pity. That said, I intend to continue the experiment and see how it develops in future years.

I did get some lovely photographs of the flowers in the first few weeks of May: