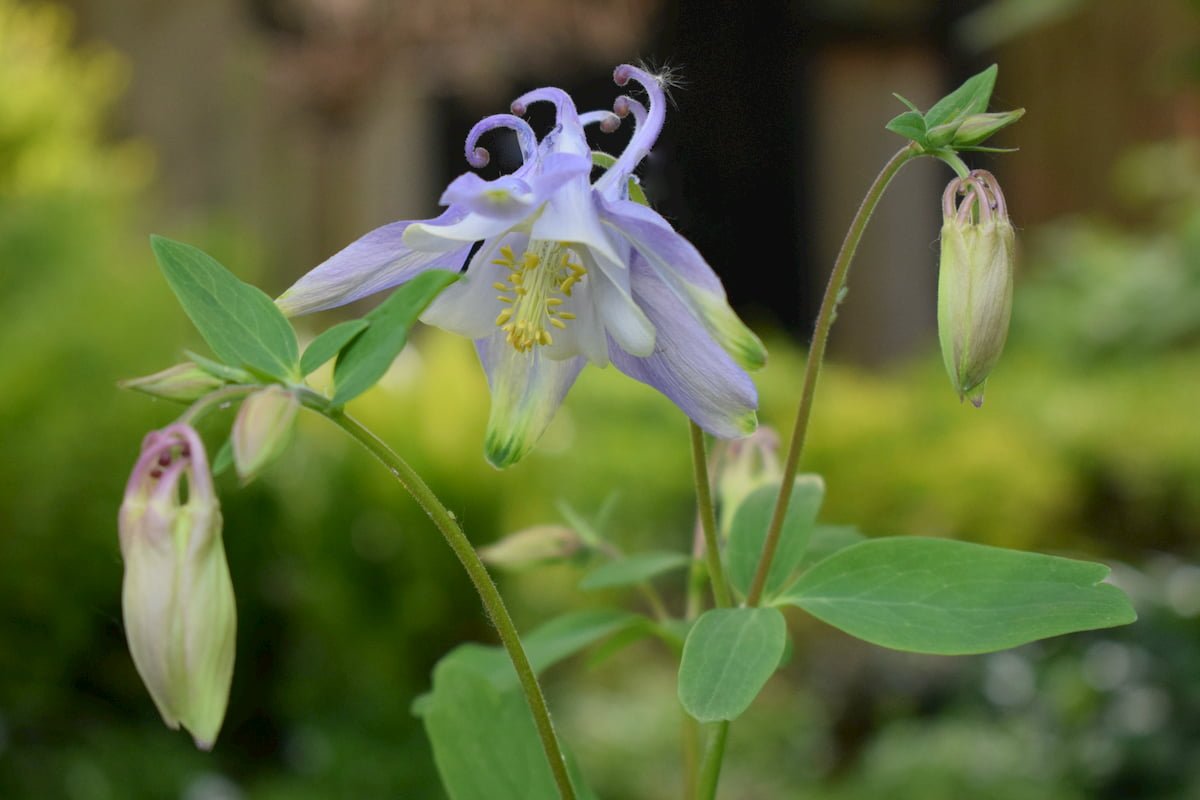 This Aquilegia is one of the prettiest and most photogenic columbines I have grown. This year, ten years after planting, it provided me with some beautiful photos which really show off its intricate flower structure. Whilst researching the anatomy and botany of the flower structure I came to appreciate where its latin and common names come from.

This hybrid Aquilegia is part of the “Star” series which includes several bi-coloured variations including rather garish red and yellow combination. I don’t usually like bicoloured flowers as they are often jarring and hard to place with other flowers, but “Blue Star” is an exception, and for me has always been at home in my woodland garden.

I only have a single specimen which was planted 10 years ago in a shady woodland bed under the canopy of a cherry tree. It has to get by on just a couple of hours of dappled sunlight per day, which may be why it has never formed a particulalrly large clump, but instead produces six to ten stems which carry multiple flowers in succession throughout May and early June.

Somehow it has survived all these years without any special attention, unfazed by the surrounding thuggery of rampaging Woodruff, Forget-me-nots, Erythroniums, Sweet cicely, Wood spurges and other ephemeral and riotous perennials that have come and gone in turn. It is testament to its garden-worthiness that it has persisted despite neglect. In theory it requires a soil that does not dry out in summer, and although I sometimes put the sprinkler on these beds after a couple of weeks of drought it gets by on very little additional water.

Every year in May I am delightfully surprised when I come across the first flush of these blue flowers; and every year I stop and admire them afresh, somehow having forgotten they existed in my garden.

This year, the early flowers opened with green-tipped sepals which made them gorgeous, even painterly, photographic subjects.

From the side you can see the long spurs that point backwards like bells on a jester’s hat. The name Aquilegia comes from the latin for eagle as the spurs were thought to resemble eagle’s claws.

The white petals are rolled up to create deep throated tubes, inviting to bees and moths — at least those with proboscis long enough to reach down to the nectar buried all the way back in the spur ends.

Five neatly wrapped white petals create an intricate scrollwork in the centre of the flower. The five blue sepals which stand behind them complete the ‘Blue Star’. The common name Columbine, I learned today, derives from the latin for dove as the five central petals were thought to resemble five doves clustered together.