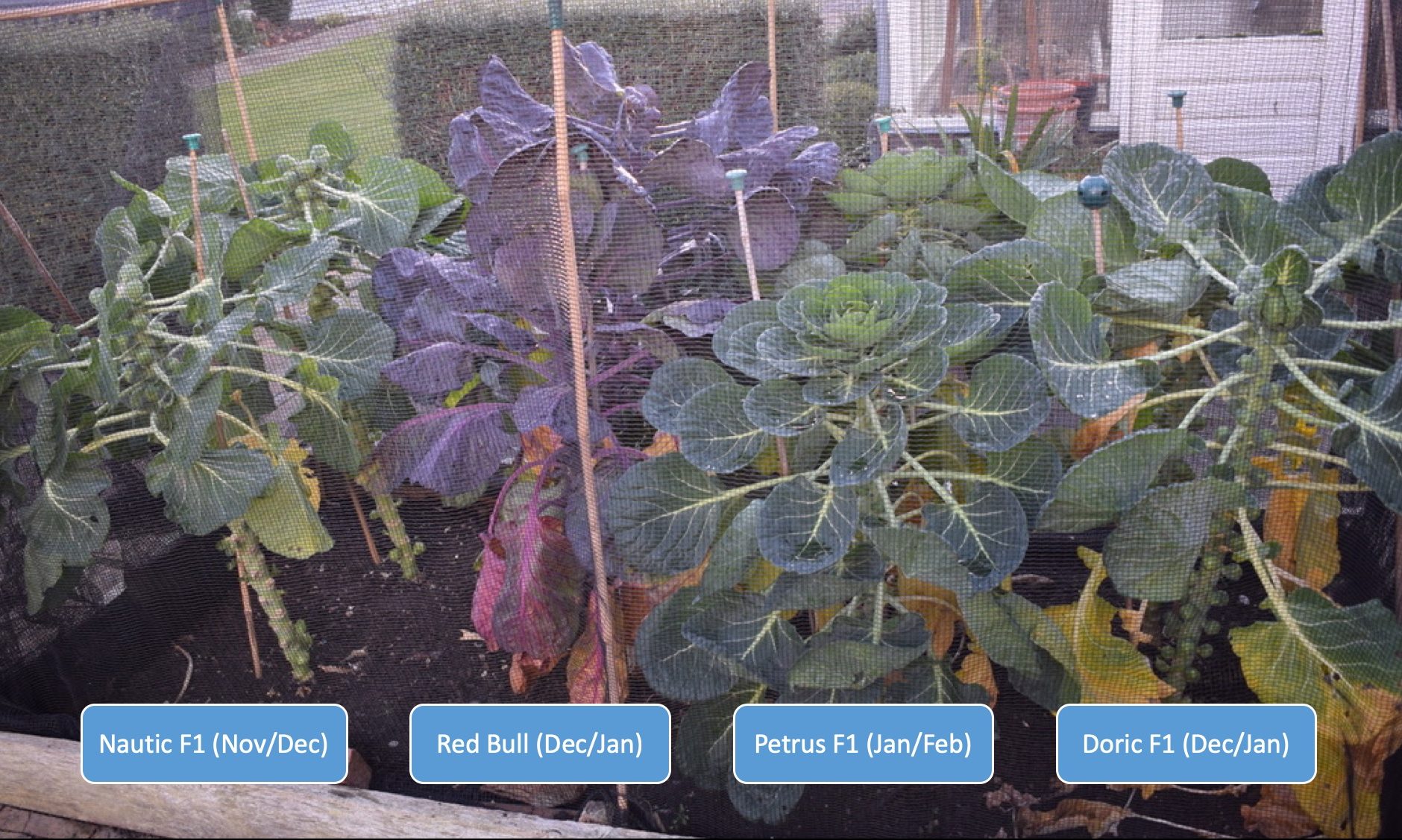 Here is my sprout bed. It’s 8ft long by 4ft wide and holds 8 sprout plants in it. The netting has kept the pigeons off and the early plants have been in production for a couple of weeks. I grow these from plugs which I purchase from Organic Plants in June. This is their sprout collection which provides a range of varieties (two each of four varieties) so that you get a harvest over several months avoiding the glut which would happen from growing a single variety. It would be cheaper to grow from seed, but for the small quantities I require plugs are convenient and easy.

Each plant was given 2ft x 2ft space and planted in soil that was enriched with manure the previous season. Sprouts are hungry feeders, so I top dress with pelleted chicken manure too. The little plug plants are 4 inches tall but can be planted deep so their stalks are partly buried but the leaves are above ground. This allows the buried stem to root into the surrounding soil. Like most brassicas they need to be planted in firm soil, so I use a heel around them to make sure they are tightly gripped.

Given the right conditions sprouts grow tall and strong, but they are prone to wind damage, so I stake them individually with canes. Netting is needed to prevent birds damaging them – pigeons will strip the leaves leaving just a skeleton of veins) and to keep away the dreaded cabbage white butterfly. (See my netting video here)

Once they get large enough and tiny sprouts start to form along the stem I pick out the tops. These sprout tops are delicious so should be kept for cooking. Removing the tops encourages energy to do into the developing sprouts making them bigger than plants that are not topped.

Brussels sprouts are quite handsome with their pastel tones and distinctive ribs. The photo above, taken Nov 25th, shows a late variety that will soon be ready to have its top removed. The purple variety (Red Bull) provides additional colour tones. Some of the plants have a natural surface yeast bloom giving them a glaucous look.

These three photos show the developing sprouts on three of the varieties.

(Left) This photo shows a stem with its supporting cane. You can also see that I have removed most of the lower leaves. This is another trick which is supposed to increase the size of the sprouts. It can be done towards the end of the summer or early autumn once sprouts have started to develop. It also helps to improve air circulation and deter mould and snails.

(middle) The Red Bull has not had its leaves removed yet, nor its top taken out. I’ll get round to it soon, but these are for eating later in the season, so I don’t need to rush them.

(right) These large sprouts are on the early plants that we are harvesting. You can see they are plump and large, especially near where the top was removed. Below is a harvest from lower down this stem:

These are going in this evening’s meal.

The sprout bed will provide two of us with Brussels for several meals per week for the next two or three months. Certainly there will be plenty for Christmas Day, but they will continue well into the New Year. Sprouts are a great winter vegetable, and along with red cabbage, sprouting broccoli, celeriac, swede, onions and carrots allow us to have a variety of home grown veg on our plates throughout the winter.

(That’s eggs and garlic in the background in case you were wondering!)
SaveSaveSaveSave