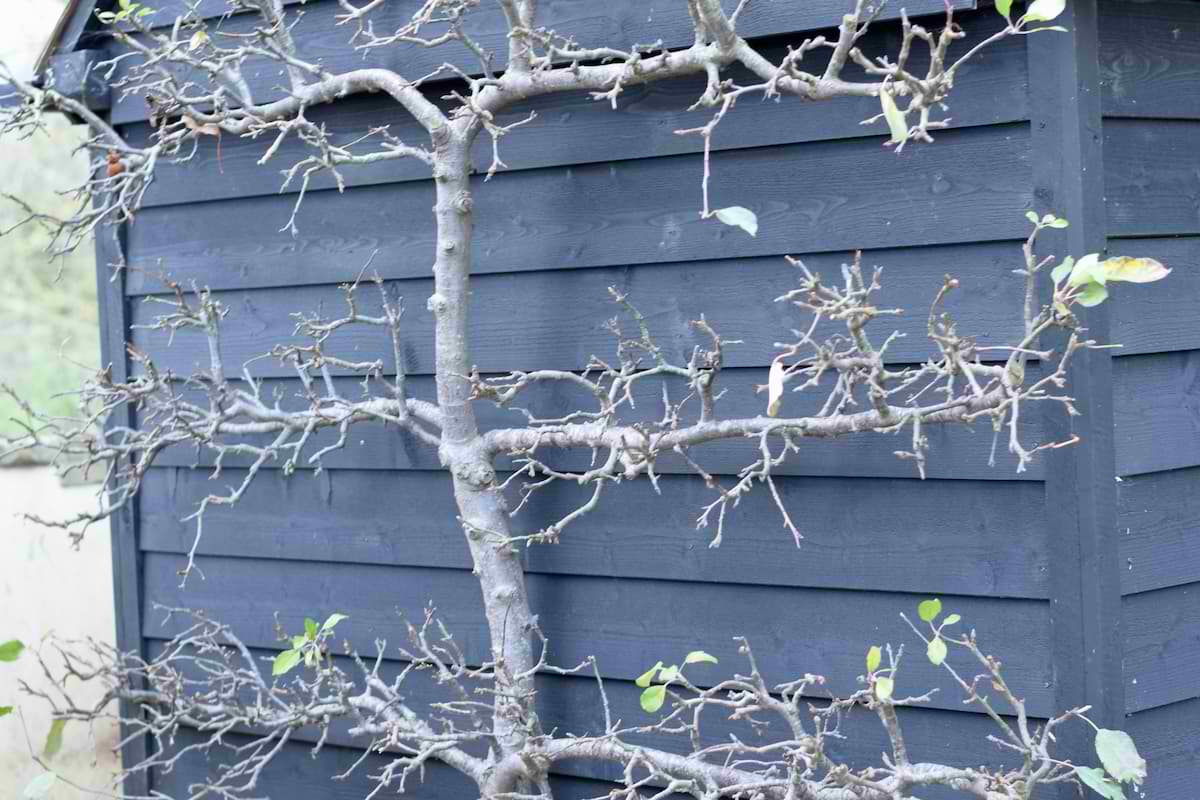 Sunset is an early 20th century apple variety, which is ready to eat in late September. The apples are medium-sized, with a red speckled blush over a yellow-green background. In good years it has an excellent Cox flavour straight from the tree, but does not store well, so we keep spares in the fridge and try to eat them within ten days. (See more here)

I purchased this tree as a pre-trained two-tier espalier in Winter 2006. The picture below shows it in May 2006, soon after planting on the end of our woodshed, which we had just finished building.

I set the wires to match the spacing of its two horizontal tiers (~18in apart) and tied them in. As you can see several new shoots have emerged from the central leader. In the summer two of the best-placed shoots were bent down and tied to the horizontal wires to create the third tier.

Espaliers are an easy form suitable for apples and pears.  The central leader is trained up and side branches trained out at appropriate levels. All other shoots are pruned back to the basal cluster of leaves as part of summer pruning to encourage fruiting spurs to form.

You can see how well it flowered a couple of weeks later (below) — it is really rather beautiful for several weeks with its pink buds and petal. As it is by the entrance to our property we pass it every time we go out and it is there to welcome us when we come home.

This photo shows the full form of the espalier just before the buds broke in spring. 4 tiers is about as high as an espalier can go. Higher and the bottom branches are likely to become unroductive. So from now on it’s just a case of pruning it to keep it this shape. However, I have plans to train the branches round the corners and along the other sides of the woodshed! (EDIT: No. I didn’t do this!)

Five year’s later: you can see that the tree has pretty much the same shape as the 2012 photo before. It has hardly increased in girth at all. I give it a summer prune each year and a bit of thinning in the winter. This is a mature and productive espalier. It’s very pretty in the spring.

Here is a before and after shot of the summer pruning I undertook in the first week of August 2017:

I also made a video of the process you can check out here.

I couldn’t believe how bright cerise the buds were this year! Below you can see the fruiting spurs bursting into bloom along the trained branches. The abundance of blooms (but probably not the wonderful colour) is down to the wonderful summer pruning carried out last summer.