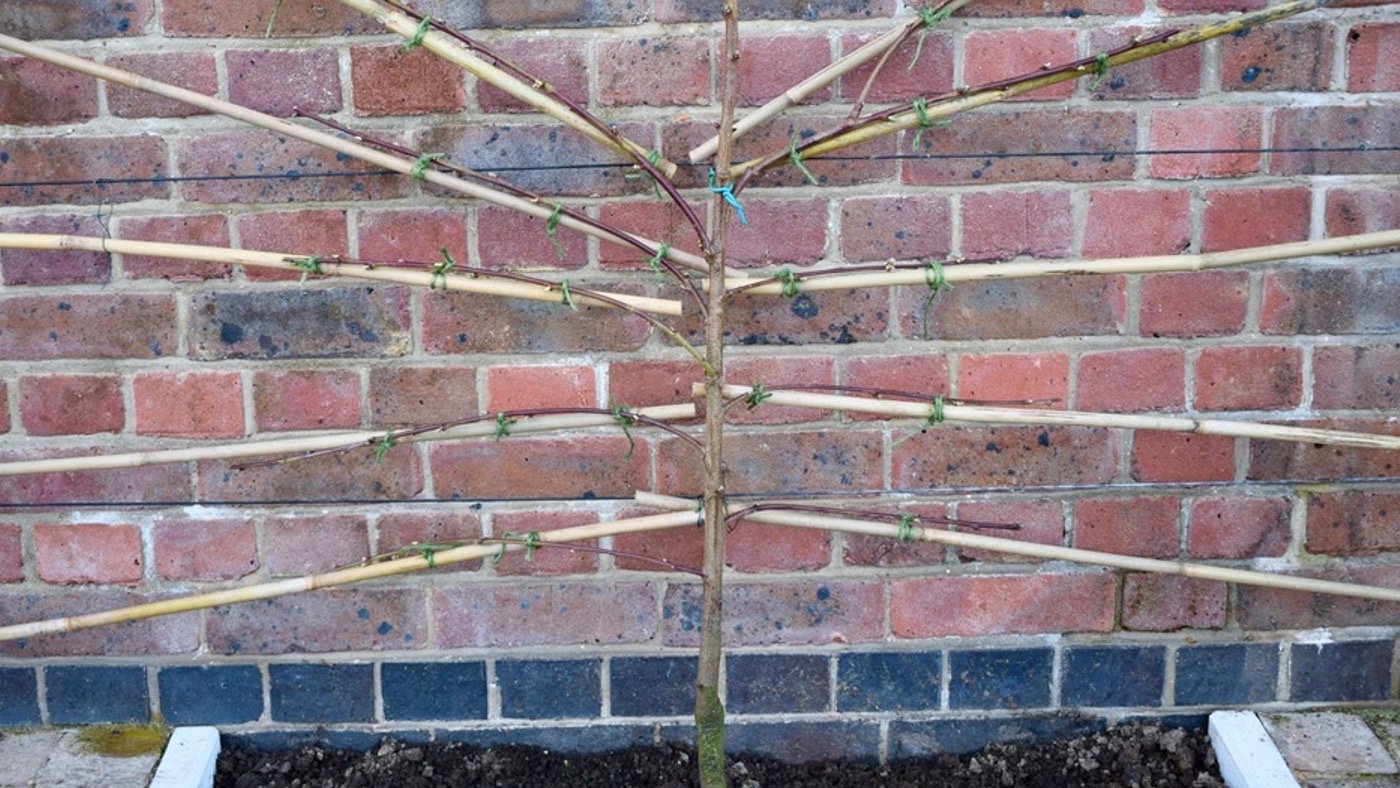 I purchased this bare root, fan trained peach tree (Duke of York) on February 23rd 2020 to train against the south-east facing wall of my unheated lean-to greenhouse.

I had left it rather late to order online finding most suppliers had sold out. But after a bit more internet digging, I came across Southern Fruit Trees. Turns out, they are a fantastic trained fruit tree nursery: a small two man team, growing all of their own stock; knowledgable and dedicated. What’s more they are only a 40 minute drive away at Liss, West Sussex. In fact, they are just a stone’s throw from Blackmore nurseries where many of my original fruit trees came from. Southern Fruit Trees, it turns out, actually supply Blackmore! I highly recommend this nursery: they are knowledgeable and helpful.

I drove over to Liss and was delighted to find Southern Fruit Trees packed with well grown, and very reasonably priced, fruit trees. A couple of hours later and I was back home with this lithe young fan-trained peach. As you can see it has had excellent initial training with lots of whip branches all laying in a neat fan-shaped plane, ready to plant, prune and tie in.

I dug a good hole, added some Rootgrow mycorrhizal fungi and backfilled with soil enriched with bone meal.

Once in, I cut back each shoot by one third. This stimulates new growth and ensures the framework stays dense. Left unpruned, the new growth would come mainly from the terminal buds leading to a lot of extension growth from the tips of the tree with only weak growth lower down each stem.

Next, I tied in each shoot to an initial framework of canes. Bending down the branches like this encourages buds to break all along the shoot and ultimately will lead to a bushy and fruitful tree. This early training will set the shape of the tree for years to come.

Three weeks later: bud break, and the first flowers appear. If I’m wise I won’t let these form fruit this year. But I am tempted to leave a couple.

By early May, there were many shoots emerging from the side branches. As expected the strongest shoots come from buds closest to the main trunk and closest to the top. Later, these will need cutting back and/or tying in.

By mid-June the new shoots were pushing forwards into the greenhouse and the whole thing looked more like a shrub than a wall-trained tree. I cut out most of the long vigorous shoots that emerged close to the trunk, including the new ‘central leader’ which was trying to take over. It was 3ft long and had many strong side branches! I should have taken a ‘before’ photo so you could see what I mean, but I didn’t think of it at the time, so here is the ‘after’ photo…

I then tied in the new extension growth that had sprouted from the tips of the shoots that I had previously trained on the canes. Looking at how the fan is developing it is obvious that the bulk of the energy has gone into the top branches, and the lower ones have grown the least. This is why traditional fans start with just two branches — one either side — to prevent the upper branches dominating. Whether this will actually be a problem in the long run, I don’t know. To some extent, fruit training is always an experiment, so watch this space!

As explained above, I started with a partly trained fan, which already had several side shoots. I had to make a decision whether to cut this down to just two side branches (one on each side) or to retain more. I opted for the latter, and trained in five branches on either side. This may not have been a good idea – time will tell – as the upper branches will tend to be the more vigorous and in time the lower ones may decline in vigour, potentially leaving unfruitful areas of wall lower down. I tend to counter this possibility by keeping all shoots at a low angle for the first few years to reduce the vigour.

At this stage my aim is to create a well-balanced framework of permanent branches which spread as far to each side as possible. This involves the following steps:

Once the main framework is established pruning will switch to ‘replacement pruning’ which is the method used for peaches. Peaches fruit on last year’s shoots, i.e. on one year old wood. Therefore, once a shoot has produced fruit, it is unlikely to do so again. The requirement, therefore, is to remove shoots that have produced fruit and tie in new fresh shoots to replace them.

So the routine will become:

Well that was a surprise! I was checking the leaves to make sure they didn’t have any insect pests… and they didn’t… when I spotted this little fella…

How did I not notice this a couple of weeks ago when I did the summer pruning?

July 7th: it’s ready. So proud… had to take lots of photos…

It proved to be every bit as delicious as it looked. It was very juicy and overall delicious – as good as any shop bought peach. The only negative was that it was a bit uneven with one side being rather over-ripe and the other side being a bit under ripe. I think next year I need to cut or tie back foliage that shades the fruit so the sun can get to it more evenly.

This post will be regularly updated as the peach tree develops and I train it further. Check back regularly!