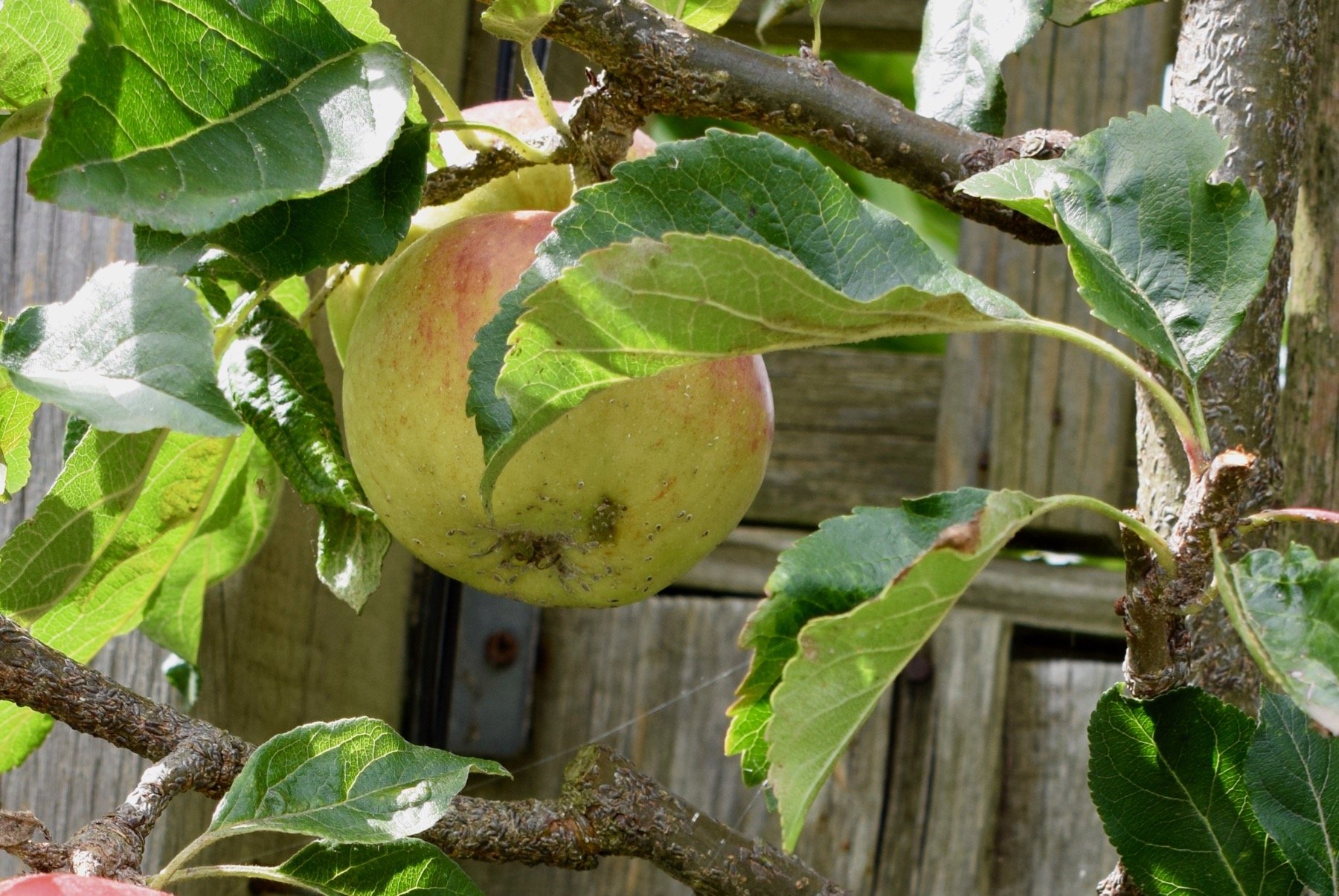 One of my apples (a triple cordon ‘Fiesta’) has suffered for a few years with infestations of Mussel Scale (Lepidosaphes ulmi). You can see them attached to the surface of the fruit in the photo above. These sapsuckers do little damage to the fruit, but they are unsightly. It’s not a big deal as they can just be wiped off before eating. I tend to ignore most minor pest problems as many of them naturally resolve without intervention.

However, last year (2016) I noticed that the Mussel scales were covering the bark of the trunk and twigs as you can see in the pictures above and below. I hadn’t realised this problem was building up, but they had infested two of the three cordons, so I could compare how the bark was supposed to look.

Unsurprisingly, they appeared on the apples in much larger numbers that year making them very unappetising. I realised that this sudden increase in severity also coincided with a drop in yield and smaller apple size. After a lot of reading, I learned that although such heavy infestations are rare they can weaken the tree. Time for action I thought…

It turns out that Mussel scale is not easy to eradicate. The little blighters hide under a ‘shell’ which makes them almost impervious to contact insecticides, including the typical organic ones such as soap solution, that I prefer to use.
Here is what the RHS says about their lifecycle:

Female scales deposit their eggs underneath their bodies during late summer-early autumn, so they are concealed by the shell or scale that covers the insect. The eggs overwinter and hatch in late May-June, when the young scale nymphs crawl around for a while before selecting somewhere to feed. This is mainly on the bark but scales can develop on the fruits of apple and Cotoneaster. The scales reach the adult stage in late July-August. (RHS website, Aug 2017)

There are very few insecticides that are able to kill them, and even then, they are only really effective if applied in May when the young adults leave the protection of the shell. Apparently, in commercial orchards where mussel scale is a problem, they use sticky traps to monitor the number of crawling nymphs, so they can target the treatment when they are most active.

Against my normal inclinations, I resorted to using a systemic insecticide. I chose Bug Clear Ultra, which has the active ingredient acetamiprid. This has both a contact and systemic action and is recommended by the RHS for mussel scale. The packaging claims that it can be used up to 14 days prior to Harvest. I sprayed in May and will harvest in September or October, so hopefully, that’s long enough for the plant to have cleared itself fully. To remind me to apply it at the best time, I set a reminder on my phone, as with a full-time job it would be easy to miss my chance.

I picked a still day, prepped the sprayer, and gave the leaves and bark a good soaking. As the insects I was targeting live under the protective scales it would not be possible to see the effectiveness of the treatment as the ‘dead’ scales would remain attached to the bark. The effectiveness would only be known a month or two later once the fruit was growing.

So, here are the results:

As you can see there are no mussel scales on the lower two apples, and although it looks like there are still many on the bark these are almost certainly dead remnants, otherwise, some would have migrated onto the apples.

The top apple has several on it though, indicating that there are some still alive on the bark nearby, so I will need to repeat the treatment next year. For now, I’m pretty happy with the results. As a single treatment, once per year, and only on one of my trees, I think this is something I can live with.

A significant additional effect to applying the Bug Clear Ultra* was that aphids which typically cause distorted foliage at this time of the year were also knocked out. Consequently, I had much better growth with healthier leaves throughout late spring and early summer.

Although I chose acetamiprid (as Bug Clear Ultra), there were other RHS recommended control measures for home use (see below), but you need to weigh up the environmental impact against effectiveness for each one. Is it really better to make multiple applications of short duration organic insecticides if they don’t provide such good control and have to be used for more years? I decided not.

The RHS lists the following approaches