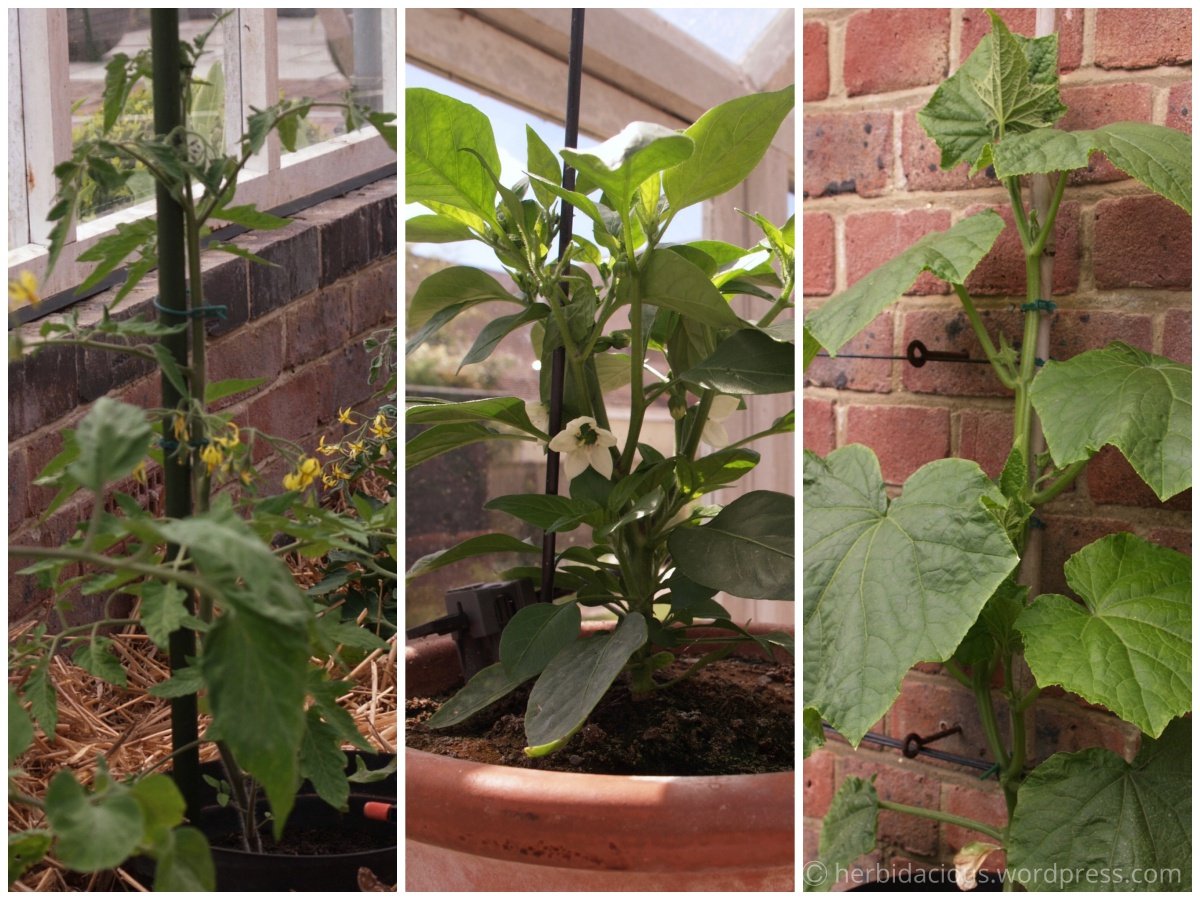 I’ve planted the greenhouse with tomatoes, peppers, cucumbers, aubergines and some hot-house ornamentals. Trying to cater for all of their needs is tricky: the tomatoes need good air circulation to avoid fungal diseases, but the aubergine and cucumber like a humid environment. This year I’m giving them all a bit more space and TLC.

Above: The greenhouse, freshly planted on April 17th. To the left the tomato bed (hot and dry). Against the wall cucumber and aubergine (high humidity). I have made a few changes to previous years. Firstly, I have spaced out the plants with the aim of growing fewer but to a higher standard. So this year I have only four tomatoes, whereas in the past I have had up to six; one cucumber trained on wires – compared to two cucumber and two melons previously; two aubergines in the bed on their own, instead of squeezing in three pepper plants with them. This should make management easier.

I have added new supports for the tomatoes. In previous years I have used bamboo canes pushed into the soil but these sometimes caused problems; often the weight of maturing tomato plants made them bend over or even collapse. They were difficult to fix at the top end and no permanent attachment was possible as they needed replacing each year.

This year I have used artificial canes: plastic covered steel tubes. Hopefully these will last for several years. Each one is pushed into the soil, with the top fixed to one of the greenhouse rafters. This forced the spacing of the tomatoes to follow the spacing of the rafters, but that fits with my new less is more philosophy.

The black plastic pots the tomatoes are grown in actually have no base, so the plants can root into the soil below. When I plant the bed each pot is half filled with fresh compost, ensuring the young plants have clean soil reducing the chance of soil borne infections. It seems to be working as I have grown tomatoes in this bed for ten years without having to change the soil.

There are several benefits of growing greenhouse plants in open bottomed pots like this.

Despite the last week of April being decidedly chilly, with average night temperatures of just 2°C, the greenhouse provided enough shelter for the cucumber and aubergines to put on good early growth:

The drip system includes two sprays which mist the brickwork and foliage early in the morning, providing the high humidity that these plants prefer. I’m hoping that by planting fewer plants and giving them more space this year I can grow better plants and control pests more easily. I intend to train side branches from the cucumber along the wires on the wall.

All-female cucumbers like ‘Femspot’ produce reliable cucumbers that are not bitter or seedy – which happens if the flowers get fertilised by pollen from male flowers. The aubergines are grafted varieties, which grow more strongly and fruit earlier than non-grafted varieties. As you can see they have only been in for a month and despite many cold nights in April, they are already setting fruit.

I find peppers one of the hardest greenhouse veg to grow well, which is a pity as they are always wanted in the kitchen. When grown in the border soil they do OK, but not as well as I feel they should, whereas the aubergine and cucumber are reliably productive.  I have seen very nice specimens growing in pots at West Dean gardens, but this method has been unsatisfactory for me in the past.
This year I have one plant at the north end of the tomato bed, where I will try and train it into a tall plant if possible, but for comparison, I have two others in tall pots on staging. The two in pots will need feeding regularly, but I have planted them in a good John Innes No 3 which I’m hoping will get them off to a good start. The organic compost I used previously dried out too quickly and seemed nutritionally deficient.