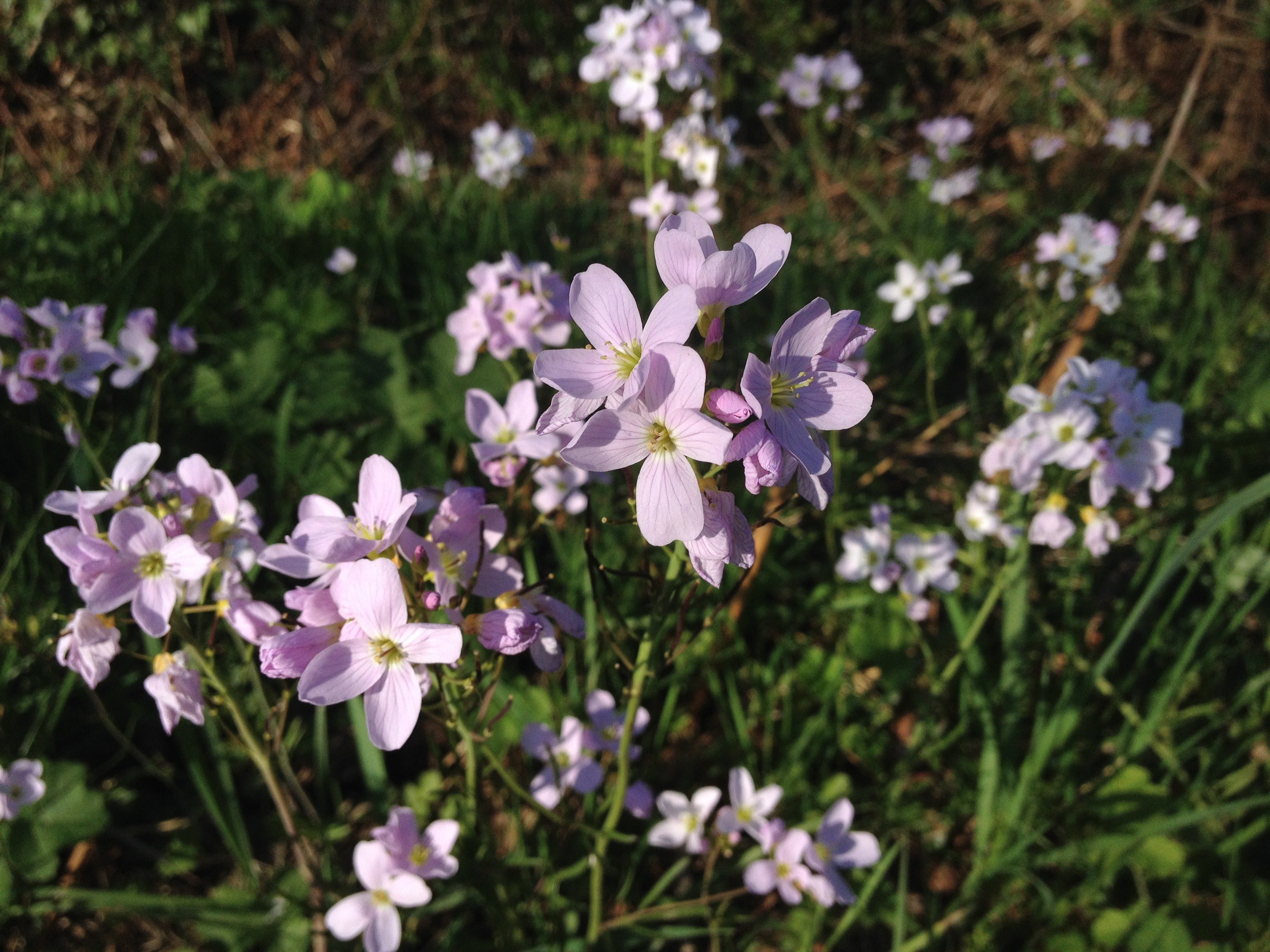 On the country drive I take to and from work there is a long straight section of hedge with a fifteen foot grassy verge in front. Each spring this verdant roadside stretch is illuminated with pointillist pale pink flowers of Lady’s Smock (cardamine pratense), forming intermittent drifts over 100 yards from end to end.

It’s not an easy place to stop as the traffic is usually doing 50 mph, and although not particularly busy it is on a long bend so stopping would create an obstruction. This year I was determined to photograph them as they are only at their best for a couple of weeks, so I pulled up on the rough verge and took a few quick snaps.

Although considered a common wild flower in England, it is rare in my experience to see it growing en mass. Typically this short lived perennial prefers damp conditions, and when I have tried growing it in my garden it has died out, presumably following a dry period. What surprised me here is that these colonies have persisted for over a decade at the foot of a hedge where one would expect it to be rather dry.

Somehow they survive being smothered by the rank plants that surround them: nettles, cleavers and

This photo shows two extremes of their subtle colour variation with eh specimen on the left being almost pure white, whilst the one on the right is quite a deep mauve. This was taken from a second colony a mile further on, a 15 ft colony in a shallow ditch. Meadowsweet – the early leaves of which are just visible in this shot – flowers here later in the year, testimony to the damp conditions in this spot.

A close up of the flowers shows their four petalled structure with distinct veins typical of the brassica family to which they belong.

Their other common folk name for this plant is Cuckoo flower as they come into bloom at a similar time to the first cuckoo song of the year. Unfortunately, I don’t think I’ve heard a cuckoo since my childhood. It is a key food plant for the orange tip butterfly, but like the cuckoo these too are becoming increasingly uncommon.

I am grateful that it is still possible to see large drifts of wildflowers like these along our verges. Many people fail to appreciate that these were once far more common sites, but farm run off and atmospheric pollution has increased nitrate levels in UK soils which favours rank plants like nettles, dock and corse grasses over delicate and colourful flowering plants that survive on poor soils.

Friends of ours have created a wildflower meadow which is rich in colourful species and the wildlife that goes with it, but they had to remove most of the top soil to reduce the fertility sufficiently for it to be a success.

If you are interested there has been a number of articles in the press recently on the effects of pollution on the countryside: