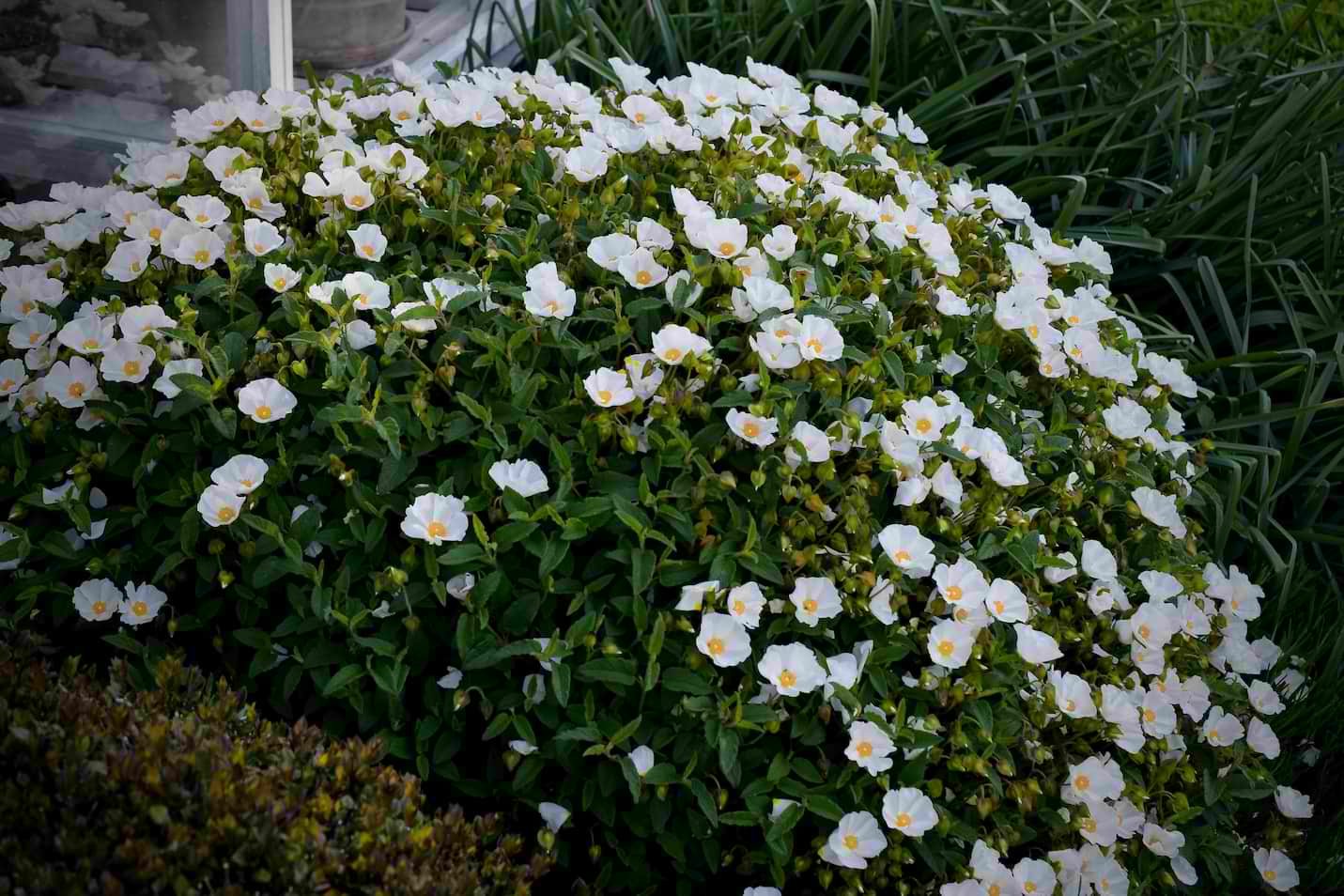 A handsome evergreen shrub
with masses of flowers in June 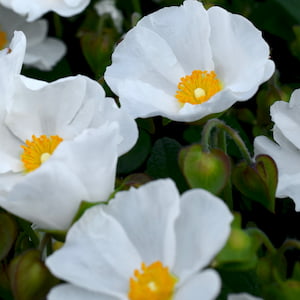 Cistus × corbareiensis is also known as hybrid rock rose (the ‘×’ in the Latin name indicating hybrid status) which provides a magnificent display of flowers at this time of year (May – June). It is a fairly vigorous shrub which will put on 15cm growth per year is unpruned. It prefers a sunny open position: indeed, it is important not to plant it too close to other plants that might shade it or whose foliage may flop on it as in the shade it will quickly and irreversibly develop bare patches.

Cistus species mainly originate in the Mediterranean; as such, the rock rose does well on poor, well-drained, even stony soils as long as it has at least a little fertility, and does not require watering once established. It’s chief glory is the all-too-brief week or so in May or June (depending on your location) when it produces hundreds of paper-thin white flowers with a central boss of golden stamens. Each flower lasts just one day before dropping its petals like confetti all around the plant. A succession of charming red-tinged buds keep up the show for several days. A shrub in full flower can stop you in your tracks.

Fortunately, despite its brief flowering period, C. × corbaroensis looks good for the whole year as it is evergreen and grows in an attractive mound shape. The foliage is handsome: pointed or oval, wavy-edged and incised on the surface. The leaves are resinous and scented: typical of plants from the Mediterranean region that need to conserve moisture.

Left to its own devices the hybrid rock rose forms a reasonably neat dome 1 metre high and 1.5 metres across in ten years. Simply pruning out any extra-long or asymmetric shoots will help. In the formal garden, its shape can be improved by clipping over after flowering, taking care not to cut back too hard as it will not regenerate from old wood leading to bare patches. Repeated light pruning two or three times per year can easily produce a nice tight dome with the ‘topiary look’ of clipped box, but without the associated problems of blight and box moth caterpillar damage.

I have grown one for many years in the long border in front of my greenhouse alongside box, myrtle and lavender all clipped into domes. This bed is part of the white garden that surrounds my lawn. Here it plays a double role, providing white flowers in June and a neat clipped evergreen mound the rest of the year.

What to plant with Cistus corbariensis

Its dark green foliage provides a contrasting background behind mediterranean herbs such as lavender, artemisia, sage, rosemary, rock hyssop and thyme. It would look good with pencil cypress or juniper. Californian lilac (Ceanothus sp.) has a similar flowering time, soil, sun and pruning requirements. The two look natural together, despite coming from different continents. Herbaceous plants to try include Alliums, Dictamnus, Dianthus, Euphorbia and Erigeron.