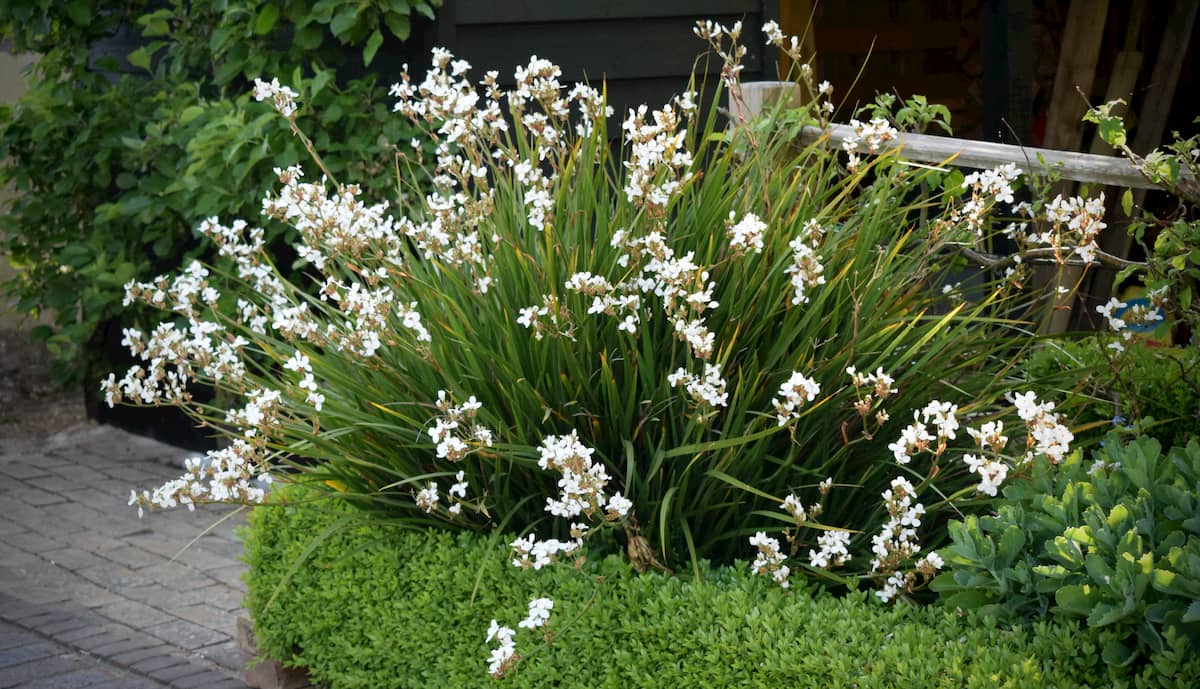 Libertia grandiflora (Syn. Libertia chilensis) is, I believe, a little-known and undervalued plant which has some great design potential given the right situation: Evergreen, architectural, easy care, free-flowering… what’s not to like?

Native of New Zealand, this evergreen grassy perennial forms substantial clumps which reach over 3ft (90cm) high and 4ft (120cm) wide after five or six years. Despite only being hardy to -5C my plants have survived the last twelve winters in the South of England unscathed. This marginal hardiness probably limits the locations it can be grown in Britain to southern counties, coastal areas, city courtyards and other sheltered locations. Alternatively, grow it in pots which can be taken in to an unheated greenhouse or conservatory in the winter.

The leaves of Libertia grandiflora are narrow (½-¾” / 1 to 2cm wide), pointed, tough, fibrous and dark green with a texture reminiscent of New Zealand Flax (Phormium tenax). Unlike the rather municipal Phormium, Libertia produces a pleasingly symmetrical clump, which deserves to be given space to look its best.

As you can see in the photo above, the flowering spikes of Libertia grandiflora increase its dimensions considerably, protruding above and to the sides by up to 2ft (60cm). In my garden I have found that this makes it a difficult plant to place as it really needs more space than I have been able to give it.

In April, numerous flowering stems emerge from within the foliage, each being three to four feet in length (90 to 120cm). The final foot (30cm) of which carries a panicle consisting of several clusters of buds which open in succession from May to June. These panicles something of an oriental appearance reminiscent of Japanese paintings of a sprig of cherry blossom. There is a certain zig-zagging and curvature to the stems, with an interesting distribution of flowers along it that deserves careful observation.

Libertia are members of the iris family (Iridaceae) and this is evident in their individual flowers which are composed of three larger petals, with three smaller ones behind and between them. In the familiar garden iris these are equivalent to the flags and falls.

The flowers are a really clear and pure bright white. A plant in full bloom can be an arresting sight, especially when seen in the twilight or under strong moonlight where is positively glows.

Although not scented the flowers attract pollinators.

While the petals are pure white, the flowers, buds and panicle as a whole also contain small amounts of ruddy brown.

Architectural qualities of Libertia in my garden

I have a black and white theme in my garden: black fences and shed cladding, with white doors. Libertia looks particulalrly good with conjunction with these architectural elements. That said, I don’t feel like I have used it to its full potential; for example, it feels a bit cramped in the box-edged bed in the first photo above. Ideally it needs more space to really do it justice and show it at its best. In the following section I’ll share some thoughts about its potential.

Once flowering has finished the flowering stems can be cut off to tidy up the plant, although this is not essential. Eventually, they will die back and turn brown, so you may want to do it later.

Although the leaves are evergreen, a small number of them die back every year, turning brown and gradually making the whole plant look rather tatty. If there are not too many of these they can be cut out individually with scissors or sharp secateurs, and if this chore is completed every year the plant will continue to look good and the task never become overwhelming.

On the other hand, if like me you don’t get round to it for a few years you might be faced with a very laborious job. In such situations the whole plant can be refreshed by cutting it down to the ground and letting it sprout a whole new crown of foliage. When I first wanted to do this I couldn’t find anyone online who had good tried it, so I took the plunge and it worked!

Renovating Libertia by cutting it to the ground

The good news is that Libertia can be renovated every few years by cutting it right back, removing all of the leaves. The fresh new growth that emerges will look fresh for another few years.