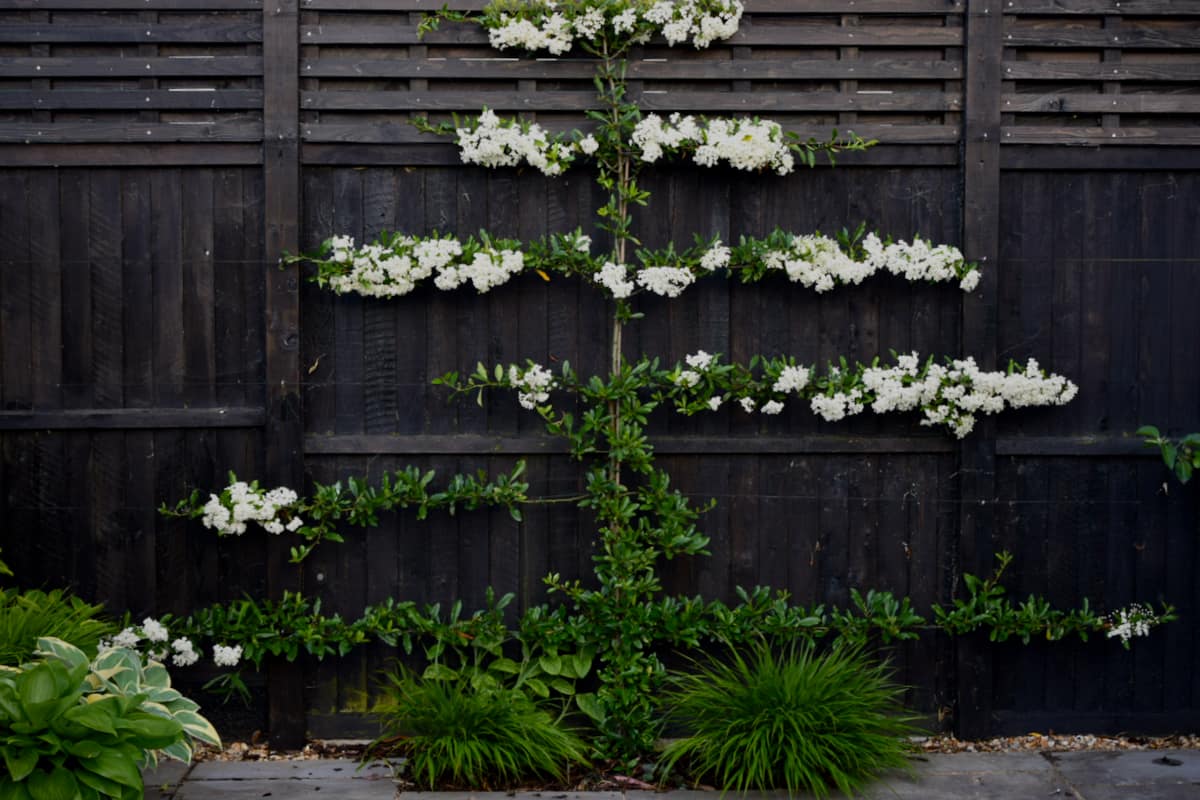 Nothing is easier to train into an espalier form than the Fire Thorn (Pyracantha). If you want to get in some practise before launching into espalier apples and pears, then this is a good way to start. An espalier is a way of pruning shrubs and fruit trees so that they create a series of horizontal branches — usually against a fence. This makes a very compact and ornamental display – far more stylish than a normal hedge. Pyracanthas are excellent candidates for training as they produce an abundance of side shoots along every branch. The shoots are extremely pliable and can easily be bent into shape and twisted around wires. Trained this way, Pyracanthas can cover almost any size area: As you can see above, mine is now 6’6″ (2m) high and heading for 12′ (3.6m) wide and it is only three years old! Along with this they are generous with their flowers which are produced in May and are followed in late summer by berries which can be red, orange or yellow, depending on variety.

Unfortunately, flowers occur mainly on young wood, so flowering will be curtailed on a mature espalier as much of this new growth will be cut back each year to maintain a neat form. That said, flowers should be seen as a bonus, as the main purpose of an ornamental espalier from a design perspective is the creation of a strong geometric form which provides structure and interest all year round. In this regard pyracantha excels as it is evergreen and very tolerant of tight clipping. The results can be as striking as the finest topiary and even take on some of the qualities of Japanese cloud pruned shrubs if that is your thing.

Pyracanthas have several downsides. First off, the thorns. The thorns are vicious and everywhere. When pruning, thick gloves are recommended. On the plus side, any fence with pyracantha on it will prove a massive deterrent to intruders. Second, many pyracanthas suffer from fireblight — a bacterial infection which leads to stems wilting and dying back. Affected stems need cutting out immediately. This disease is spread from plant to plant by pollinating insects so pruning to prevent flowering is an effective preventative strategy and a worthwhile compromise to protect a mature espalier that may have taken years of attention to create. Fireblight affects several related species including hawthorn, apples and pears and can be spread between them. If you grow any of these, keeping your pyracantha flowerless will help protect it (and them) from infection. Alternatively, the ‘Saphyr’ range of pyracanthas is resistant to fireblight.

How to espalier a pyracantha

Once the main framework is in place:
Annual maintenance pruning to keep the form

Chronology of my espalier pyracantha

I purchased this plant from a nursery as it had three good shoots in a symmetrical arrangement. I tied the two side shoots down into a horizontal position along tensioned wires that I had previously set up along this West-facing (actually WNW facing) fence:

This year I renovated the fence behind the pyracantha, adding trellis to the top, and staining it black.

The nylon Gripple wires had to be removed during this process, but due to their clever tensions block this was easy to do.

Pyracantha produces multiple side shoots along every main branch, so you can usually find close to the right place to train along a wire. Unfortunately, mine didn’t have one to fill the second row on the right. I assumed that it might put out one in the following year, but this proved not to be the case, so my espalier may be forever lopsided.

Here’s the plan: if no suitable side shoot starts to grow I will allow a shoot from a horizontal above or below that wire to develop and train that one across the gap and then along the horizontal wire. You can see such training in this flowering current at West Dean gardens:

In just two full years of training you can see how far the Pyracantha espalier has come. I am still missing a couple of tiers, but there is plenty of time to fix that. The effect is already impressive and has taken very little work to achieve. It has created a definite focal point and (along with the black fence stain) made a real feature of this previously drab part of the garden.

True to form, there’s a really good crop of berries this year. In future I expect fewer as pyracantha flower (and hence fruit) on new wood, and as the espalier becomes mature, I will be pruning most of this off. But for now: enjoy!

As you can see the pyracantha is looking really great! This spring I pruned off all of the shoots coming off the main stem between each horizontal tier revealing the ‘trunk’. This has really improved the overall look and brought it much closer to my intended vision.

I didn’t do this earlier in case I needed any of the side shoots to train in to replace a failing main horizontal shoot, but this is no longer necessary as they are all doing so well.

If you look at the previous photos (May 2020) you can see that a couple of the side shoots were quite under-developed, but they have grown out nicely and the whole thing is looking much more balanced.

I cannot emphasise enough how easy this espalier has been to create and maintain. I only attend to it two or three times per year, and then only for 20 minutes or so. This is really something anyone could achieve. The main requirement is having the vision of where you are going and then being persistent over several years.

By the way, the black fence looks good doesn’t it? It sets off the vivid green foliage and grey trunk beautifully: much better than the boring grey-fence panels did before I stained them.

It is interesting to compare this photo (mid-April 2022) to the one immediately above (early-May 2021). You can see how much it grows in one year. Of course it was pruned in the summer of 2021 to shorten shoots that formed along the branches so that the foliage remained tight to the branches. The tips of each lateral were also tied in to the wires, extending the arms, on average, an additional 30cm either side. With each passing year the espalier gets better and better. It is looking really impressive now. Not bad for 5 years work!

Note: THIS POST WILL CONTINUE TO BE UPDATED AS TIME GOES BY