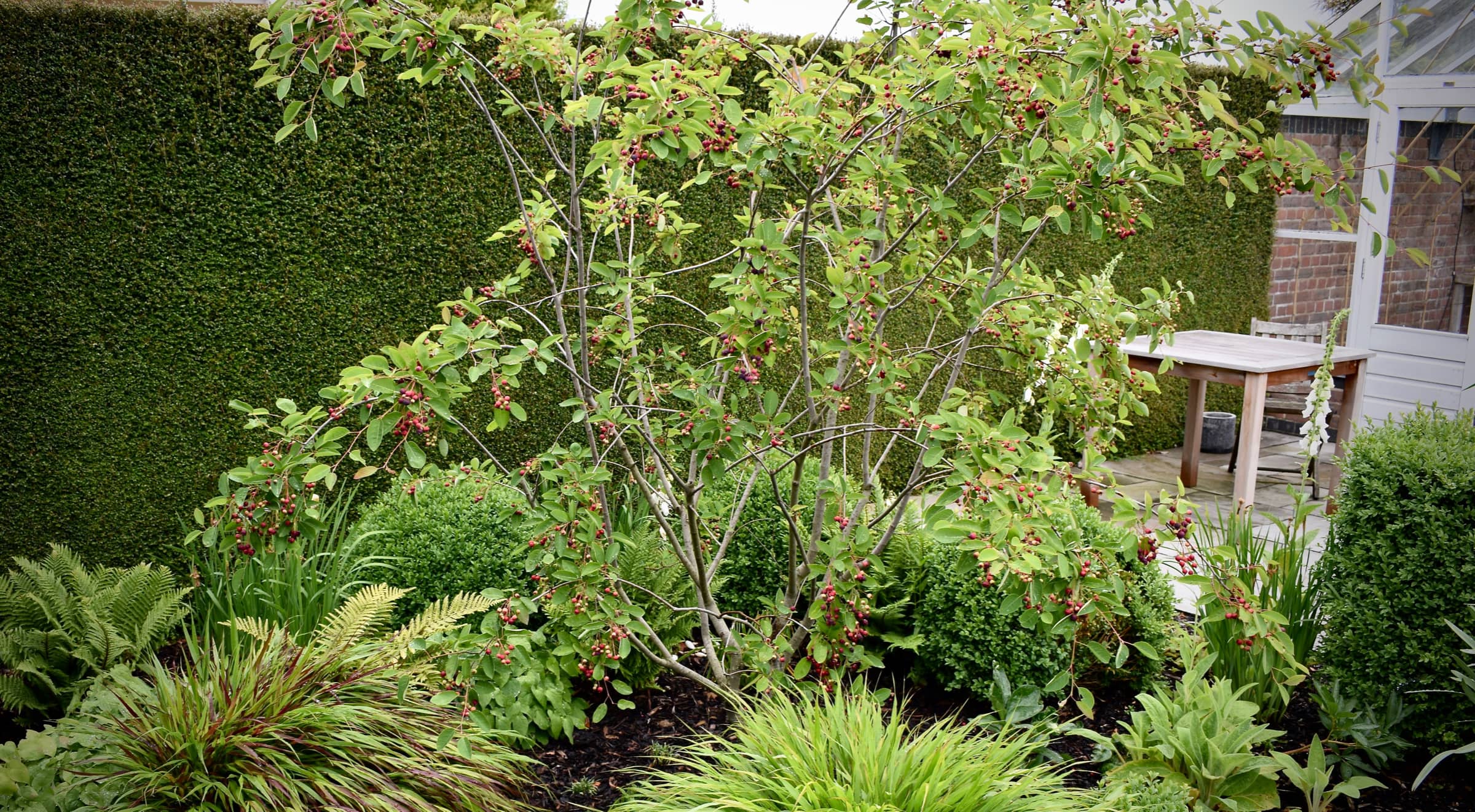 The bed nearest our house is filled with woodland plants: clipped box, textured ferns, billowing Japanese forest grass, white foxgloves and irises. It is very close to the house and can be viewed close up from the dining room kitchen glazed doors. It is very beautiful with its textural quality and cool calm sophistication and enjoyable to watch as the seasons change. However, there was always a sense that it was a bit bare – something missing. It really needed a canopy of foliage and some trunks, but being so close to the house it wasn’t obvious what the right shrub or tree should be.

The Snowy mespilus is a large-shrub or small tree originating in North America, but naturalised in Europe and widely planted the world over. It is available as a standard with a clean straight trunk, but I wanted a multi-stemmed specimen with more angular stems.

It seemed to have many of the characteristics I was looking for along with brilliant autumn and spring colour, white flowers, and fruit. The photo above shows it 3 months after planting with the berries on show.

What has always been missing in this part of the garden is the woodland canopy. Not just a ceiling of leaves to create dappled shade, but the bare stems rising from the underplanting. This year I remedied the omission by adding a semi-mature tree. the problem was to find just the right one. It needed to be something with enough instant impact, but also slow growing and ultimately controllable – especially as I would be planting it within 3m (10ft) of the foundations of our extension.

I found a source online: Paramount Plants who had an end of winter sale (40% off) and a nice range of large containerised trees. You could even select the exact one you wanted as each had its own 360 degree video! I always mull things over, but when I looked again a week later there was only one left! I placed the order there and then: £344 including delivery. It arrived a few weeks later, in early March.

After digging a large hole the tree was eased into place (which was quite a task as the rootball was very heavy); it was then rotated, tilted a little this way and that, and examined from several major viewpoints to make sure it looked good from every angle. It was then backfilled and watered thoroughly. An initial prune removed crossing branches and sharpened up its outline. The result was delightful…

The Snowy mespilus starts the year in late March/early April by breaking out in fine downy buds. These are white with a pink-coppery tinge to the stems: Very beautiful to see so early in the year, and definitely ‘snowy’ as the tree’s common name indicates.

Here it is in flower a week later. The flowers are individually small (about 4cm across) with five pure white petals and yellow stamens in the centre which attract early bees. Emerging just behind them are the juvenile leaves which have a distinctly coppery-brown colour.

The flowers are particularly luminous in the early evening, really shining in the gloaming and later in the moonlight.

As April proceeds the flowers gradually go over to be replaced by the unfolding foliage. The coloration turning from white to copper as it goes. The young foliage is translucent and looks beautiful with the sunlight behind it int he morning light.

By mid April (see above) I had mulched the surface around the base of the tree and planted some dwarf mundo grass (Ophiopogon japonicus ‘Nippon’), which in time will form a little carpet of evergreen grassy foliage. It is very slow growing, but I have seen large clumps looking glorious. Being short and shade tolerant they will hopefully help show off the grey stems of the Snowy mespilus without obscuring it, even in winter.

The ferns, iris and Japanese forest grass (Hakonechloa) are only just getting going, so the Snowy Mespilus has definitely extended the season of interest of this bed by several weeks.

By mid-May the copper colours of spring had given way to a calm green. The two photos below show how the tree makes a good division between the house and the small sitting area near the greenhouse. The foliage is quite open producing a dappled shade — ideal for the woodland plants below, and for the Lonicera hedge behind it. I will prune it annually to limit its growth, but this year nothing needs doing except enjoying it.

Another common name of Amelanchier lamarkii is Juneberry, and indeed the berries ripen in June, gradually turning dark red before going nearly black. These little fruits are edible and have a mild apple flavour, which accounts for one of the other names of this species: Apple Serviceberry.

This page will be updated in the future to show a full season of this delightful little tree.

The birds stripped the berries from the Amelanchier in a matter of days! But the tree went on to look beautiful all summer: fresh green and delightful.

At the beginning of October — earlier than I expected — it began to show autumn colouration: at first, just tinges of copper, but quickly becoming more orange, then red. Here it is mid-month:

This close-up of the foliage shows the vivid colouration and pretty veining of the leaves. Amelanchier is known for its reliable autumn colour, which is all the more impressive for starting so early and not requiring a frost to kick-start the change.

After a great start to its second year (lots of flowers and berries again) the Amelanchier has proved to be the perfect small tree for this bed.

As you can see in the photo below, it really sets the scene for the shade-loving plants beneath it:

By mid-summer, though, I became concerned as leaves took on autumn tints and started to fall. I actually thought it might be dying.

By late July it had lost half or more of its leaves, but it then stabilised. I made a few enquiries and a number of possibilities came to light:

Whatever the reason, it seems to have got through. Here it is in early autumn, still clinging to the remaining foliage which it kept from July until November.

The Amelanchier kicked off the year with a glorious display of flowers. I particularly like this view with the dark green hedge behind it showing off its handsome grey stems and flowers so clearly.

Below is a gallery showing the succession of flowers, new leaves and berries over the next six weeks (April 2021 to early May 2021). Click to view larger: