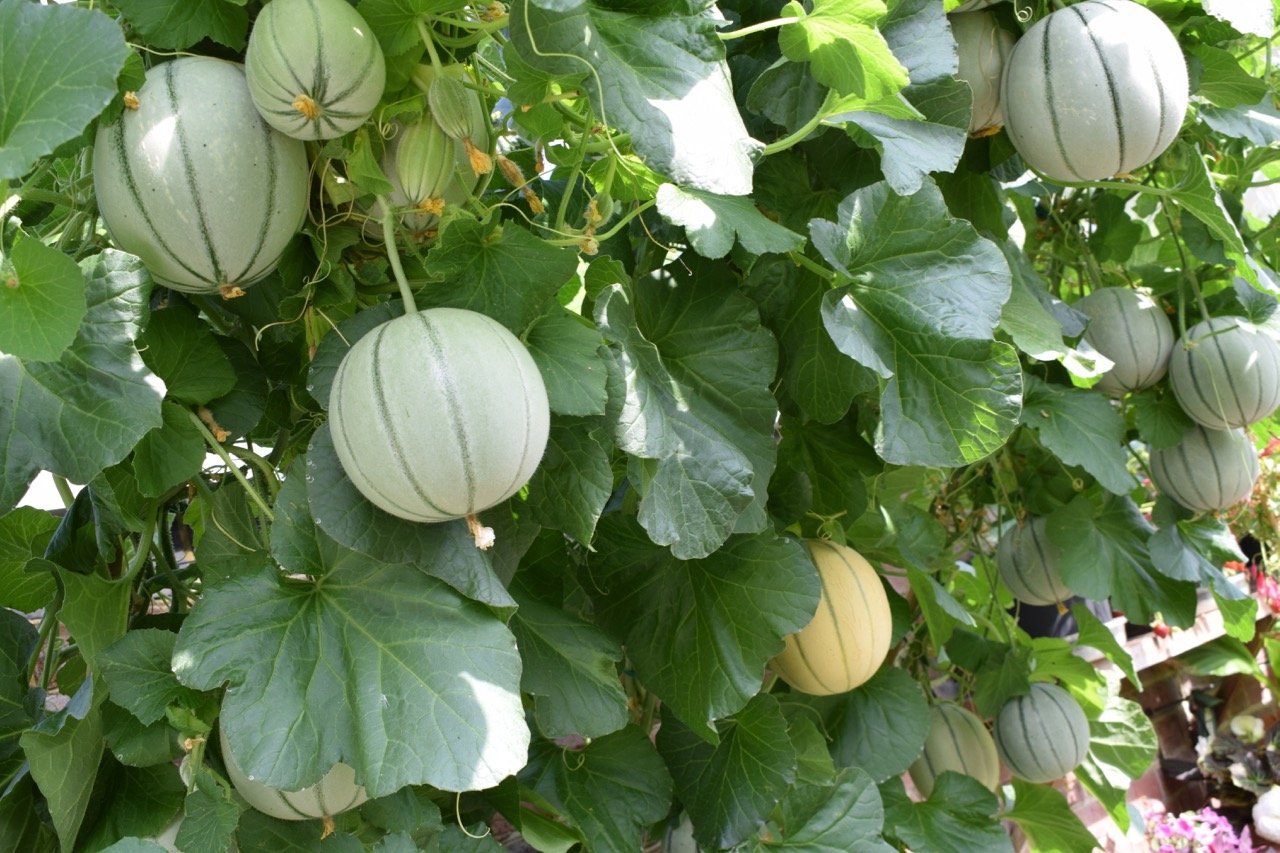 Charentais are a fragrant variety of cantaloupe or musk melon, bred in France in the 1920s. Typically they are more difficult to grow than standard cantaloupes and rarely succeed outdoors in UK climates. Their short shelf life makes them expensive in the supermarkets and the narrow window for picking them at their best means you are always at risk of getting a dud when shop buying. Home-growing these exotic fruit can, therefore, be a very rewarding challenge. But if you have a greenhouse I’ll let you into a secret or two…

This year the UK has experienced a summer heat wave with no end in sight as I write. This has been perfect for melon growing with plenty of heat and light. As you can see from the photo above, I have a bumper crop on the way. With my three vines producing 8-12 melons per piece. That yellow specimen in the centre of the picture has just reached the perfect point for picking – at the end of this article we’ll crack it open and see.

As well as good weather, I believe my success this year has been down to the methods which I will outline below.

Melons require plenty of light, warmth and sunlight in soil that is consistently damp but not waterlogged. They prefer a medium-humidity, somewhat drier than is ideal for cucumbers. They like a rich organic soil – with plenty of compost or manure, and benefit from warm roots, especially early in the season.
My greenhouse is a lean-to with one side benefitting from a warm wall (above left). I tend to use this side to grow cucumbers and melons as they benefit from a higher humidity and heat retention early in the season. I maintain humidity with mist sprays from the automatic watering system here. High humidity suppresses their main pest – red spider mites. Tomatoes and peppers, by contrast, prefer a lower humidity with better ventilation to prevent mould formation, so I grow those on the glass-wall side (above right) close to the window vents.

Typically melon vines are grown across the ground in a large bed (perhaps 5ft x 5ft per vine), but in a greenhouse, where space is at a premium growing them vertically works well. Supports should be arranged before planting so that there is minimal disturbance later. Mine were spaced 22in (55cm) apart, which proved ideal for the training method I used.
As you can see in the photo above, I have arranged the canes vertically for the first 3 ft (90 cm), then taken them at an angle up to the ridge. The idea here is three-fold. Firstly, the vines are easier to reach from a step-ladder on the path as they get taller because you don’t need to lean over so far. That makes maintenance easier. Secondly, the fruit will hang down clear of the vines, making it easier to inspect and pick them. Thirdly the foliage can orient itself to the light over a large area parallel with the roof glass, with sufficient space to prevent leaves touching the glass thereby keeping air circulating. Foliage touching the glass is at increased risk of developing mildew and other fungal problems and more likely to scorch. As you see below the top foliage is very healthy:

This photo was taken above the diagonally trained vines showing that none of them are touching the glass and plenty of air can circulate.

Melons do MUCH better with bottom heat – i.e. a high soil temperature, especially in the early part of the season.
They do not like cold roots, and in the typical British climate the soil at planting time (late April) is likely to be too low for them. Without additional heat melon seeds will fail to germinate and seedlings will rot-off. For this reason many people sow seeds in a heated propagator in April, and plant them on in pots, also in the heated propagator in May. Even so, when it comes to planting them in their final position cold soil can easily send them into a sulk for many weeks while they wait for the soil to warm up. If like me, you grow them alongside cucumbers the results can be very marked: the cucumber growth typically being double or triple that of the melons.
In Victorian England when melons were a luxury and had a lot of attention lavished on them, a deep melon-pit would be prepared in the autumn containing a lot of rotting material – compost, manure, even whole animal carcasses were buried. Over winter the decay process would heat the soil, so that by May the temperature in the melon beds could be ten to twenty degrees above that of the surrounding soil. Growing melons in such ideal conditions – i.e. a deep, rich, heated soil – is key to perfect results.

Instead of burying a horse in my melon bed, I installed a 50W soil heating cable 4 to 6 in (10-15cm) below the surface of my melon bed. The one I purchased was 20ft (6m) long, which was enough to zig-zag around the space where the vines would be planted – an area about 5ft x 1ft (1.5m x 0.3m).
I switched the cable on a week before planting, and left it running continuously for the next 2 months whilst the vines were actively growing and setting fruit.
I think providing bottom-heat like this has made a remarkable difference to the rate of growth this year.

As well as heat, melons need a good deep root run with reliable moisture and lots of organic nutrients. For that reason they are not ideal for growing in pots or grow-bags. I prefer to grow them in the deep soil of the permanent greenhouse bed. My initial preparation in early April consists of digging in lots of composted manure and organic plant food.
Some people experience problems with permanent green-house beds, due to a depletion of nutrients and a possible build-up of soil-born diseases, but I have not had any such issues despite using the same soil for over 10 years. This is probably thanks to the following technique of planting in bottomless pots.

I grow my melons from plug-plants which I purchase online in April from Organic Plants (aka Delflands Nurseries). This year the variety was Alvaro, an F1 Charentais with the ability to ripen outdoors in the UK in a good year. Even so, it does much better under glass.
I plant each plug in a bottomless, 8 to 10 inch (20-25cm), plastic pot. I excavate a 3 inch deep hole first so that the pot can be part-buried in the surrounding soil. I then half fill the pot with good quality compost (a 50/50 mixture of loam based (John Innes No3) and a good quality organic compost.
This ensures the plants have plenty of fresh (disease free) soil to get them started but also have a good deep root run where they can seek out nutrients and moisture.
Because the soil in the pot is raised above the soil in the bed it drains well, reducing the chance of stem rot. The raised pot rim makes it easy to apply water and feed where it is needed.

I use an automatic watering system that comes on for 4 minutes at a time. The greenhouse plants are supplied with fixed drip lines (approx 1 litre per minute) or adjustable trickle nozzles for higher flow rate. Each melon pot has one of the trickle nozzles directed into the pot. These were initially set to come on once per day (at 6 a.m.), but as the plants got bigger (and the summer got hotter) to twice per day (6 a.m. and 6 p.m.)

As the vines grew I tied the main stem to the bamboo. When side shoots developed these were also tied in vertically to the bamboo instead of being allowed to develop as horizontal laterals which is the standard method.

Most of the fruit develops on the side shoots, so I was a little concerned about keeping them all bunched up, but it actually worked out just fine and didn’t seem to reduce cropping.

The image below shows how the melons developed over the following three months. Notice in picture 2 (May 28t) how the melons (the three vines on the left) have grown almost as fast as the cucumber (just visible on left hand edge).

The first flowers to appear on the melon vines are male. After a week or so, the first female flowers appear. These are notable because they have a little immature melon fruit behind them, the size of a small marble. Many of these turn yellow and fall off, but some develop and start to swell.
Once these first female flowers appeared I water weekly with a high potash fertiliser with seaweed extract as directed on the label.

In this picture you can see fruit at various stages of development on the same part of the vine. These will mature in sequence and can be cut when ready providing melons for many weeks.
Traditionally, melons grown on wires would be supported by tying netting or old stockings to make a sling to support them. The main reason for doing this is that many varieties of melon develop cracks in their stems as they ripen, so there is a risk that they will fall and bruise. The other reason is that they are heavy and could tear the vine supporting them.
Charantais melons are quite small (5 inches across) and many varieties like Alvaro do not develop cracks near the stem, so do not drop. I have not bothered to net mine and they are doing fine.

Here is a shot of the first vine with six of its 11 fruit visible.

Fruits are ready when they turn yellow and produce their distinctive aroma.

When ripe they can be left on the vine for a few days until you are ready to harvest them. If you are not ready to eat them, then place them in the fridge to keep them at their best. If they are left too long on the vine, however, they will develop cracks, weep juice, fall from the plant and/or become host to hundreds of fruit flies. What a waste!

Here is our first ripe melon of the year (July 21st).

Here it is cut open.

Notice the cracks that were developing close to the stem (visible on the left hand half).
Without netting this might have dropped if I had left it for too much longer.

The flavour was very good: juicy, sweet and fragrant; Tropical fruit and flowers. The seeds occupied only a small section with plenty of flesh. It served four of us at lunch today and was good enough to be eaten on its own, au natural.

Here is a shot I took laying down in the centre of the greenhouse and looking up into the three over-arching melon vines. How many melons can you spot? (click to enlarge)

8 thoughts on “Success with Greenhouse Melons”